Haruki Murakami, master novelist and enthusiast of long distance running, makes this observation about the repetition of writing, and the experience of repetition itself as a perceptual tool for tweaking the senses:

“The repetition itself becomes the important thing; it’s a form of mesmerism.

I mesmerize myself to reach a deeper state of mind.”

Seth Horowitz’s The Universal Sense is an exhaustive, lucid, and entertaining neuroscientific foray into the many ways hearing, listening, and sound shape the mind–how sound affects the way we think, feel, and act. Horowitz is a professor of neuroscience at Brown University who specializes in studies of comparative and human hearing. He’s also an enthusiastic sound generalist, driven by a conviction that “much of the inner life of sound dwells beneath conscious thought” and gleefully sharing story after story on a dizzying array of topics related to human and animal perception of sound and music. Among these topics: Horowitz explains why some sounds are irritating (nails scratching on blackboard) or ominous (buzzing wasps), the unsettling effects of subsonic and infrasonic sound, movie soundtracks and jingle music, and the vibratory phenomenon that causes us to fall asleep while driving on long and straight roads. In sum, The Universal Sense is an inspiring read that further confirmed my own conviction that music and sound-making are very special ways of knowing the world indeed.

The more Horowitz explains it, the more our sense of hearing and sound perception seems very remarkable. Sound is the swiftest of emotional triggers, and our hearing is a faster sense than vision (“vision maxes out a fifteen to twenty-five events per second, hearing is based on events that occur thousands of times per second”). And hearing outpowers taste, touch, and smell by allowing us to perceive the world around us at great distances. But with this speed and power come vulnerabilities as well. Horowitz explains the many ways sound can “hack” the brain, and how we can engage sound or silence to deliberately hack our own minds. We can, for instance, limit the sounds that reach us to increase our focus (hello noise canceling headphones!) or voluntarily expose ourselves to loud sounds to give up control–as if under the spell of a hypnotist. I don’t know about you, but by these measures I am most definitely a mind hacker.

Horowitz also explains how sound can have particularly powerful effects on us when it makes deep perceptual demands. In one passage that reminded me of the challenges of perceiving polyrhythms (more than one rhythm sounding simultaneously), Horowitz explains that a key to musical entrainment is having multiple sonic inputs that are diverse yet also acting together: “To get massive amounts of brain entrained to a single rhythm, you need complicated input from a number of sources all acting in concert. One method is to use binaural beating…”

From here, Horowitz details how we perceive two pitches that are tuned slightly different from one another–like the gongs in an Indonesian gamelan tuned closely but not exactly the same–as having a “beating” effect. As we are reminded over and over again in this book, sound, even though immaterial, has very physical effects: the acoustic has affect.

Finally, Horowitz reminds us that affect is all important in how we understand sounds–whether the sounds of our favorite music or the sounds our own voices. Indeed, “the emotional basis if communication relies not on what is said but on the acoustics of how we say something.” Consider saying, Horowitz tells us, the word ‘yes’:

“Now say it as if you had just found out you won the lottery. Now say it as if someone had just asked you a question about something in your past that you thought no one knew about. Now say it as if this is the fortieth time you’ve answered ‘yes’ in a really boring human resources interview about how much you love your job […] What you changed was how you said the words: overall pitch, loudness, and timing.”

Inspired by Horowitz’s discussion of “yes” I remembered a humorous video called “50 Shades Of Hey” in which an actor demonstrates dozens of different ways to say the word “hey.” The video demonstrates the musical and affective qualities of everyday speech and how easily we can discern shades of meaning out of slight variations of tone and delivery. From this perspective, making and listening to music is just one of the ways we make sense of the world through hearing sound.

excited sounds
flying around corners
and down the hallway,
partly muffled,
half exaggerated,
out of proportion,
out of breath,
and weakened upon
their diminished arrival
at my ear

–a thought appears:
listening with sympathy
makes the music doubly resonant
by giving it the benefit of doubt.

Yet the music
doesn’t ask
or encourage
such sentiment

only appreciating
its generous goodwill.

hearing sounds of flight and roar, 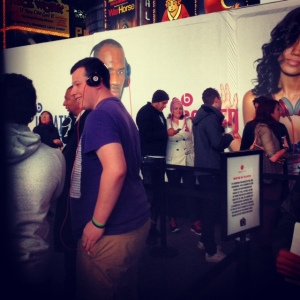 It was here and gone in a day, but I couldn’t quite figure it out: a promotional tent for Beats By Dre headphones for which people were lining up to get inside. What was inside? As far as I could tell, an opportunity to try on headphones in different colors and have your photograph taken while doing so. Here’s the warning sign alerting the public:

I tried to get in but was stopped by large man with a small head who told me I had to get in line. But the line was way to long so I left.

I have written on this blog previously about the popularity of Beats headphones, citing their extended bass range as one of the qualities that makes them appealing for a lot of listeners in large noisy cities like New York. But it hadn’t occurred to me that wearing headphones could be a fashion statement and an opportunity to be photographed.  The “be seen” aesthetic has become de rigeur in Times Square over the past few years as giant LCD billboards have multiplied at alarming rates. Some billboards even cover entire skyscrapers:

And there is one clothing store that encourages customers to have their picture taken inside and then go outside to see themselves displayed on a gargantuan billboard for a few moments.

I don’t know what Beats did with all the photos they captured of folks smiling and wearing their headphones. But the exhibit is a reminder of how stylish music technology threatens music itself as a main object of our attention. As listeners we’re simultaneously technology consumers, fetishizing our gear.

I recently saw a striking cube-based structure by Sol LeWitt (1928-2007) at the MoMa. When you stand in front of it and take it in, the work works on multiple perceptual levels. Here are few things that I noticed:

one large (about 5 by 5 foot) and shallow three-dimensional square;

and a twenty-five square foot wall space divided by a superimposed grid.

There’s nothing hidden here: you can see not only the metal structure, but also right through it too–to the spaces inside the cubes (on whatever scale you see the cubes on) right onto the cube shadows on the wall itself. As art, it’s not trying to represent anything but itself. It is what it is: solid yet transparent.

LeWitt’s work also reminds me of structures I see (and hear) a lot in electronic music circles, specifically the grid matrix used on drum machines, sequencers, and samplers–instruments which, by the way, are increasingly one and the same piece of hardware. Consider the classic Akai MPC drum machine/sampler

or the more Novation Launch 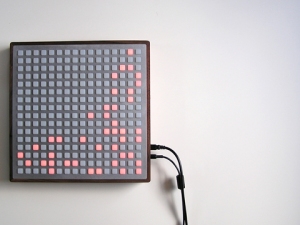 We can move in other directions too. LeWitt’s cube structure also reminds me of beloved (musical) games from my childhood, including Mego Corporation’s Fabulous Fred (1980) 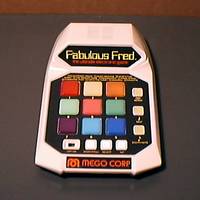 LeWitt, widely regarded as the founder of both minimal and conceptual art, began making what he called his open and modular “structures” in the 1960s and the cube form was the basis of much of this work. Thinking analogically about LeWitt’s modular cube piece as I look at it, it feels like an early sign of the repetitive and grid structures of minimal and electronic dance musics (not to mention the grid structures of electronic music controllers). No, there probably isn’t a chain of direct influence here–though LeWitt was an influence on some minimalist composers, some of whom may in turn have influenced various electronic dance musicians. But maybe the significance of the modular cube as art idea lies in its calm anticipation and representation of the digital world many artists inhabit today.