The brettworks blog has a new page called Gallery that features photos I’ve taken while running. You can access the Gallery here.

There’s a man
who walks the subway train
each night asking for money
by way of wayward singing of a song.

“Fee-lings” he begins,
nodding to that old standard
but the riffs turn to his hunger:

and then the proposed solution–
“I like chi-cken”
–exhaling
a single harmonica tone.

The song
hasn’t changed in years.
By now it’s a routine, and music
–music!–
is nowhere to be found.

For a long time I used the yellow note pad app on my Apple phone to write these blog posts. But every once in a while I deleted notes accidentally. The problem: that little trash can icon is right next door to the email icon! Touch the trash by mistake and your note is gone–without even a preventative “Are you sure you want to delete?” prompt. So I made some deleting mistakes. And then things got strange. A few times I deleted an old note and then other notes mysteriously deleted themselves as well. This past May was particularly bad in this regard: a whole month’s worth of notes vanished. Maybe the app was open while the phone was in my pocket and I mass deleted stuff? I just don’t know. I should have backed up the notes in the cloud you say? Yes, I should have, but alas I didn’t.

So, I don’t normally use this space to plug products (musical or otherwise), but I’ve been using an app that has been directly useful to the blog so I thought I would mention it.

The app is Evernote. It’s free. It’s simple, clean and green. And it’s hard to accidentally delete notes. In fact, I don’t yet know how to delete a note within the app. Useful for me, and maybe for you too. 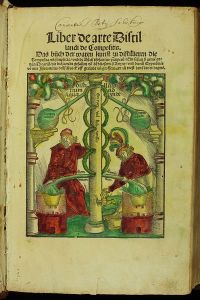 Hieronymus Brunschwig’s The Book of the Art of Distillation, circa 1500. (Source: Wikipedia)

The music speaks for itself, yet I still feel a need to respond to it.

One way to respond is to copy it–internalizing the parts of the music that resonate with me and use them in my own work somehow.

Another more public way to respond is to translate the music’s most salient attributes into language. The sense of sounds suggest words, and words can be organized into soundful sense.

So for a while now I’ve been writing short haiku-length pieces on music I’m listening to.

But I don’t want to create a play-by-play translation. Instead, I want a snapshot distillation–as if the music was paused and gathered up into a single moment.

Distillation is an ancient process of purifying a liquid through evaporation and condensation, reducing it to its essence.

Can music be distilled through a few words? If it can, then the value of these words may be that they point listeners back to the music itself.

Music distillations are engagements with sound, a trace of an encounter between listener and music, and an advocacy: I liked this and maybe you will too.

Together, engagement, encounter, and advocacy form a kind of poetic criticism, launching the reader through words back into the flux of music.

For more on the goals of critical writing about music, see my blog post on the excellent thoughts of Wire writer Tony Herrington here. 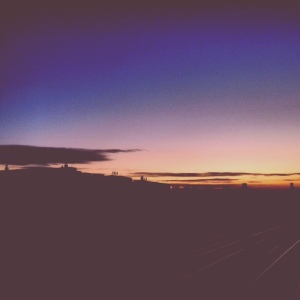 My recent recording Another Kind Of Wonder is now available on Spotify. 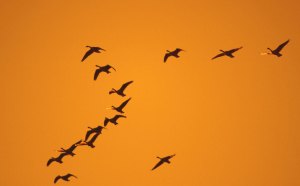 The trick is to work swiftly
and then stop
just before
you completely figure out
what it is that you’re doing.

It’s about how each of us is influenced by one another–by other writers, musicians, teachers.

By voice I don’t mean our actual speaking voices (though those can have their influence too).

I mean that something in the character and essence and presence of each of us that resonates outward and affects others–whether we know it or not.

I think about this because it amazes me how deeply I can be influenced by just a single voice.

Which reminds me: voice is always singular.

By influence I mean a process of immediately taking on some of the qualities of another’s voice in one modality or another.

In being influenced we become ventriloquists of sorts, channeling and re-voicing those who have influenced us. I’ve explored this idea of ventriloquism in my Ventrilo-Dialogues, such as this one.

I have encountered a small number of influential voices in my orbit of experience, and I continue to discover new ones, though not very often now. Sometimes the voices are those of people I know, sometimes they are musical voices, and sometimes they are writing voices.

What is most significant about the influence of another’s voice, though, is the metamorphosis of its influence into immediate change. As you assume the voice, you assume persona, inhabit gesture and space, and take on affect in a new way. Like when a music teacher shows you something and says: “Do it like this.” You do it like that and immediately assume a new voice–or at least get a glimpse of what that voice feels like. Not on you, but as you.

So, as this is a blog post about influence and voice, it is also about how malleable we are.

All we need to do is pay attention to the process. 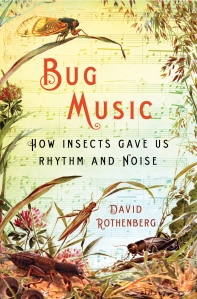 “One sound can be enough if it repeats enough enough enough times so the meaning becomes subservient to the sound”–David Rothenberg, Bug Music (114)

There is a powerful idea behind David Rothenberg’s spirited recent book, Bug Music: How Insects Gave Us Rhythm And Noise, which is this: listening to the rhythmic and buzzing sounds of insects such as cicadas and crickets and katydids can teach us about music by helping us hear “beyond the scales and chords of human sense” (11). In fact, the complex, interlocking, and noisy sounds of insects may be the original model that inspired human musical practices in the first place. After all, these sounds are music-like–“immediately accessible, emotional, and interesting” (11). We just need to pay attention to their soundscape.

Bug Music is a timely book too because this summer is the time of a giant cicada emergence. Cicadas are periodical insects that emerge once every 17 years and this year’s emergence, known as Brood II, will take place along the Eastern seaboard  of the United States over the next few months. (For more information, see magicicada.org).

Through a half-dozen chapters, Rothenberg follows his insectoid muse, digging through scientific research, historical literature that mentions insect sound, philosophy, and finds connections with music theory, ethnomusicology, electronic music synthesis, and visual art. He also makes field recordings of insects, plays clarinet with them, remixes them, and even invites an overtone singing friend to make more music out in the field. Along the way we meet interesting bug researchers and bug music enthusiasts and get a sense of Rothenberg’s ongoing curiosity about the deep connections between human music and the sounds of the natural world. (Rothenberg has also written books about birdsong and whale music.) There’s so much probing stuff here that touches on serious musical issues, while the narrative is always playful and loose. It’s a perfect combination. Reading him, you feel like you’re along for a fun, interesting, and sometimes wacky road trip.

For me, one of the most compelling themes in the book is the rhythmic phenomenon of insect chorusing: how huge groups of insects like crickets make their collective thrum. Research has found that insect chorusing follows a simple response-mechanism that produces “interesting rhythms of astonishing complexity” (76). Each insect times their sound and its duration relative to what is going on around them, and the result is “the potential for thousands of rhythmic divisions at all levels of pulse and design” (92). What is interesting here is how each insect does its own independent thing, thereby contributing to the thick rhythmic texture of the mass chorusing. As Rothenberg suggests the “appeal of the insect model for in-phase, out-of-phase rhythms” (110), it’s hard not to think about those human musics that are organized along similar lines. Later in the book, Rothenberg describes the musical value of chorusing insects as “hundreds of independent, irregular rhythms, perhaps listening to each other, perhaps following their own internal drummers, all but part of a giant rhythmic surge…” (200). Insects help us “find ways of delving deeper into the periodic possibilities of repeating structures” (ibid.). Still he wonders: “How can it sound so much like it makes sense even though no one is in charge?” (192)

Which leads to a big question: Did we–humankind–learn our love of rhythm “from listening to the polyrhythmic swirls of the entomological soundscape” (99)? Rothenberg thinks so. “Nature is full of oscillators” (93) and insects “are our original teachers of rhythm” (173) he says. He can’t prove this, of course, but still urges us to “listen outward and expand our acoustic consciousness” (98), not to mention our consciousness of time itself. Chorusing insects present a model of multiple time scales sounding simultaneously, and Rothenberg observes that there “is a way to look at all of music as a hierarchy of levels in the experience of time” (85).

Rothenberg is adept at making analogical connections too. Levels of time scales find their analog in vertical layers of a sonogram of an insect soundscape that Rothenberg includes in the book. Here, Rothenberg compares a sonogram of a recording of singing by BaBenzele forest-dwelling people from Central African Republic that includes the sounds of crickets, cicadas, katydids and frogs (“every creature has its place amid the sonic frequencies”, p.157) with a musical transcription of a performance by a choir and drum ensemble in Ghana. It’s an interesting comparison in that both feature

“repeating simple patterns, overlapping, each at distinct places on the sonic sphere, independent, but fitting together in a way that makes the whole greater than the sum of its parts, the key property of any polyrhythmic, emergent musical order” (160).

Polyrhythms and emergent musical orders lead to another interesting thread in the book: the connection between insect sound and electronic music aesthetics. Or rather, how electronic music can help us understand insect sound. Rothenberg is particularly interested in the technology known as granular synthesis that enables musicians “to work fluently with insect-type noises and make music out of them” (86). He cites the electronic musician Curtis Roads, author of the granular synthesis manual, Microsound (MIT Press, 2004), who writes that granular synthesis helps us shift our idea of music “away from sharply defined intervals towards curvilinear and fuzzy morphologies” (90). In some of the most engaging passages of the book, Rothenberg describes his ongoing experiments with software synthesizers to make “complex thrumming textural”, insect-like sounds (187). Instruments such as the Zebra synth can make evolving soundscapes that behave like chorusing insects. As Rothenberg plays with the software he muses that so “little is written on the power of texture and timbre in the history and theory of music” (192-193). Perhaps it is through texture and timbre (and rhythm) that we can “go deeper into these edge-musics we can barely explain” (196).

By the book’s end, Rothenberg is playing clarinet with cicadas (while his son contributes a little iPad), trying to insert himself right into nature’s sound mix by contributing his own tones. The meta-lesson here has an ecological edge: that we’re all part of the same soundscape, each of us contributing our voice to the whole. In sum, Bug Music urges us to take seriously the “swirling and complicated sound textures” of insect soundscapes because doing so will change how we listen and how we think about what music is and its role in our lives. At the very least, insect sounds serve as a reminder that if there could be such thing as a universal kind of music, it might well be a densely layered, rhythmic, repeating, and communal kind of thing.