Musical memory is an interesting thing. Sometimes we remember with great clarity bits and pieces of a music–a beat, a catchy hook, a lyric, a chord progression. My wife’s memory seems to work this way: she has total recall of the words and melodies of just about any song she’s ever heard. Another kind of musical memory works in more amorphous ways, leaving us with only traces of what we listened to. These traces often take the form of a remembered gestalt–kind of like a compressed snapshot of the music. My memory often works this way. Having listened to a favorite piece a few (or many) times, I begin to mentally play back the sounds in a condensed form. The entire piece becomes a short loop of favorite parts juxtaposed together that I can somewhat hear in my mind’s ear. I say “somewhat hear” because I recall the overall vibe of the music more than any part in particular detail. Something about it has left a trace, and this trace–a memory of my repeated encounters with the sounds–is enough to help me recall the vibe of the music and keep me thinking and writing about it.

Here then are a few favorite musical moments that left traces here at brettworks in 2013: 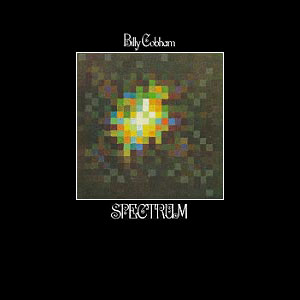 Walking home from the local grocery store, I found myself at a steady but slower than normal stride, moving my head up and down, and yes, beat boxing a beat and a bassline. I may have even spun a move over the curb, skipping along as the plastic bag with the peanut butter bounced off my hip. Then I caught myself mid-beat: “What am I doing? And what is this song?”

The song was “Red Baron” by the jazz-rock fusion drummer Billy Cobham, from his 1973 debut solo album Spectrum which I bought as a discounted cassette when I was a teenager. The beat and bassline on “Red Baron” impressed me. It’s a perfect example of what musicians call “in the pocket” playing: something about the timing of Cobham’s relaxed yet authoritative beat placement creates the sensation of thickness. Listening to track today on Spotify, I noticed how much the drummer’s presence can (still) be felt. The presence is in Cobham’s weighty drum sound, but also in the spaces within his playing, such as at the ends of phrases where he plays a fill and then seems to pause a nanosecond before resuming the beat. The nanosecond pause–real or imagined, I’m not entirely sure–makes all the difference in how the music feels. Cobham takes his time no matter how intricate his playing and creates a musical flow that is perfectly steady yet the opposite of metronomic. “Red Baron” breathes easy like someone struttin’ down the street and embodying the essence of funk. No wonder its forty-year old groove stayed in my head all these years. It must have made an impression.

In his recent New Yorker essay on creativity in jazz and popular music (drawing on recent biographies of Duke Ellington and The Beatles as his case studies), Adam Gopnik makes a distinction between idea-based and action-based notions of creativity:

“Originality comes in two kinds: originality of ideas, and originality of labor, and although it is the first kind that we get agitated about, we should honor the second kind still more. There is wit, made by the head and spun out into life; and work, created mostly by the fingers engaging tools as various as tenor saxes and computer keyboards. It is an oddity of our civilization, and has been since the Renaissance, to honor wit more than work, to think that the new idea ‘contributed’ by the work matters more than the work itself” (Adam Gopnik, The New Yorker, Dec. 23 and 30, p. 123).

In the music world, critics are ever alert to characterize and describe the next big idea that manifests itself through an emerging style–whether it be minimalism or dubstep, post-classical or vaporwave. But how easy it is to forget that creativity in music lives on the ground, at the intersection of body-minds and instruments, unaware of its outside interpreters trying to make sense of it. And while any individual musician-composer may not overtly “know”–that is, be able to tell you with certainty–why they do what they do and what to call it, the value of their work remains within the practices that constitute it.

If you have an interest in creativity, there are a number of reasons to recommend watching the film Cooking In Progress. The film tracks Ferran Adria and his crew from the famous El Bulli restaurant in a coastal town in north-east Spain. El Bulli is now closed–Adria has since turned his energy to opening a culinary and creativity center, as well as Bullipedia, a website database for mapping all the world’s culinary knowledge. When the restaurant was open, it operated for only six months of each year. For the other six months, Adria concentrated on culinary research at a kitchen lab in Barcelona. The key, as he puts it, is to “separate creativity from production.”

Much of the film takes place at the lab. We see Adria’s head chefs running experiment after experiment on different ingredients and different cooking techniques. Every once in a while Adria pops in and has a taste, frowns, makes suggestions for variations or alternate combinations, and his team’s R&D continues. As the El Bulli chefs experiment, they also meticulously document their findings by noting measured amounts, taking pictures, and rating the taste of their dishes. They’re like scientists running tests, then pouring over their results on giant note boards and laptop computers.

A few comments by Adria stood out for me. The first is his conviction that one needs to create time for oneself in order to have time to create. Sounds simple, but it’s really the most crucial first step of any endeavor. The whole point of closing El Bulli for six months of the year, after all, was to literally produce time. Another Adria comment is his notion of the importance of doing “creative audits” of one’s work to identify trends, habits, ruts, and evidence of what work has worked and what hasn’t. Creative auditing is necessary as a way to keep track of one’s progress and keep at bay–as much as possible–the overwhelming sense of all the possibilities not yet explored. As Adria puts it, “our problem is that there are a thousand combinations.” Finally, I was also struck by Adria’s constant awareness of the bottom line of all the culinary research in his lab: taste. In one scene, Adria describes the sensation in more poetic and adventurous terms. “At the moment” he says, “what matters is whether something is magical, and whether it opens a new path.” The chef/scientist/artist seeks through taste a sense of “surprise, emotion, and a new texture.”

There is something very musical about all this. Beyond the techniques, the equipment, beyond the ideas and flavor (or sound) combinations that may seem good in theory, there is the question of how the food (or the music) actually makes us feel in practice. Inevitably, the science always encounters the subjective I–me the taster (or me the listener). Near the end of the film, we see Adria tasting an oil, ice, and tangerine concoction. He looks up from his plate, glancing wide-eyed around the room. “This is it” he says simply.

In 1960, the ethnomusicologist Mantle Hood wrote an influential article called “The Challenge Of Bi-Musicality.” The article argues for the importance of the western student learning how to perform non-western music. Performance allows us to get inside the music and experience its technical, aesthetic, and sonic challenges. Drawing on examples from his research on Indonesian gamelan music, Hood discusses the skill sets required to hear complex rhythmic cycles and small gradations of pitch and tuning. “The training of the ears, hands, eyes and voice and fluency gained in these skills assures a real comprehension of theoretical studies” he wrote. Hood’s article reminds us that music performance in any tradition makes huge cognitive and physical demands and to be bi-musical is analogous to being bilingual or fluent in more than one musical “language.” Okay, music may not be a language, but when we learn to speak through its various tongues we can experience new ways of being in the world.

I thought about bi-musicality when I heard about the story of Jennifer Grout, a young American woman from Boston who has made the finals on Arabs Got Talent by impressing the judges with her fluid Arabic singing and competent oud playing. While attending university in Montreal, Grout began learning oud and singing Arabic popular songs. She even travelled to Morocco to learn Berber music. And yet she understands very little Arabic. In other words, Grout is bi-musical but not bilingual (not yet, anyway).