Ethical losses
resulted from marginalizing
the intersubjective,
antiphonal equilibrium
that had been practiced
in ritual real-time collaboration
between performers and crowds.

Centering
music creation
on computer screens
compounded these difficulties.
The resulting music
has sometimes celebrated
the expulsion of any trace
of fallible
and funky humanity.
The sinuous warmth
of real-time bass and drum
was often surplus (…)

We should not be surprised
if the ‘regression of listening’
is an idea that springs to mind
when considering the consequences
of this shift.

There is regression in the obvious sense
that ears are no longer
being conditioned
to the possibility
of distinguishing
the sampled and simulated
from the played.

Sequenced and quantized sounds
become indistinguishable
from the older but still-supple
forms of interactivity
that characterised music made
in a culture of listening
for a community of listeners,
rather than an aggregation
of shoppers, downloaders,
and headphoned poddies.

A culture of loneliness
–not merely of isolation or solitude–
accompanied this change
and now fosters a yearning
for forms of sociality
to which the market aims
to provide ready-made solutions.

“We had to respect the sound that was coming to us from the cistern walls and include it in our musical sensibility.”

“To listen is to pay attention to what is perceived, both acoustically and psychologically.”

• An article about interpolation in pop music.

“That idea of singing a bit of somebody else’s song in the middle of yours (known technically as interpolation) might just be the future of pop music. After all, in a world where practically every new track feels like a haunted house beset by ghosts of melodies past, deliberately evoking another song seems like the audacious and self-aware thing to do.”

• A video about music and repetition.

“Musical repetition is deeply compelling. It invites us into music as imagined participants, rather than as passive listeners.”

You could say that experiences
are deceiving,
but you cannot say this
if the goal of your description
is the characterization of experiences
and nothing else (22).

A method for studying something
always discovers only those possibilities
that spring from a world the method creates.
The perspective defines
the phenomenon from the outset (37).

Describing my experiences
at typewriter and piano,
I find no good use
for an analytic conception
of ‘the thought’–
there is only process.
Maybe the thought
has a chordal significance (57).

The musician,
like the writer or speaker,
regularly confronts his conduct
as performance or not (65).

When I listen
to a Herbie Hancock solo,
I listen with my hands (68).

The body
is a natural
higher mathematician (78) –
the embodied calculus
of such accomplishments
as reaching for a doorknob
and getting there on time (79).

Who will convince me
that there is more beauty
in a Bach cantata–
that its encounter is richer or deeper
or more intricate–
than there is in the sound
of a single piano string
loudly struck
and grasped
over the entire course of its decay? (86).

The clock or the philosopher
can never describe time.

“The text is a tissue of quotations drawn from the innumerable centres of culture.”
-Roland Barthes, Image, Music, Text, p. 146

There is much that’s elegant in the music of the UK trio, The XX. Their instrumentation is spare–two voices (one female, one male), an electric guitar and bass, and a DJ making beats and other sounds, from pad chords to noise effects. The voices of Romy Croft and Oliver Sim are unaffected in the sense of not being swamped in reverb or Auto-Tune but rather recorded up front and dry, and in the sense that they stick to a fairly limited range and have a whispered, almost spoken quality. And The XX’s song designs make maximal use of minimal materials–a few chords carefully arranged are enough to carry the vocal melodies far.

“On Hold”, the first single from their new album, is elegant in all these ways, but has a few twists. The song has an electro kick-snare-hi hat-hand claps beat and a four chord progression that snakes around a few variations: I-V-vi-IV, to I-vi-IV-ii, to I-Iv-ii-IV. The progression is coolly effective in sounding almost but not quite the same each time through, which in turn makes the vocal melodies stand out differently. Listening to the song becomes like looking at the same figure against differently colored backgrounds. On the chorus we hear a third voice in the form of a sample from Hall & Oates 1984 song, “I Can’t Go For That (No Can Do).” Though I remember that song from when I was a kid (I used to make cassette mix tapes for house parties—don’t ask), I returned to it on YouTube last week and was delighted to notice that it features a drum machine, has a 50 second intro without vocals, and its video has an opening shot of singer Daryl Hall manipulating sounds on a Prophet synthesizer. Anyway, the verse of this 80s song has the line “You’ve got the body, now you want my soul…” On “On Hold” Jamie XX, The XX’s third member and producer, samples and re-pitches Hall’s lines “Where does it stop/where do you dare me” and “You got my body”, but the word “body” is cut off, which makes it more rhythmic and insistent. Parts of these lines are also mixed in underneath to make a kind of lower register sample wash counterpoint.

Why this sample though? Maybe to set up a play of opposites. Sampling is often used this way–to re-frame audio from the past in the present, while simultaneously commenting on the present through the past. While the Hall & Oates song alternates between swooning (“I, I-I, I’ll do anything”) and then coming to one’s senses (“Say, no go), the XX’s “On Hold” stays fixed on a bleaker realization that a relationship simply isn’t/wasn’t/hasn’t been working (“When did we go cold? I thought I had you on hold”). When we hear and recognize the Hall & Oates sample we notice how the word “body” has been truncated which steals it away from us, as if to reinforce The XX’s point: that our relationship went cold to the point that you don’t even have my body (!). Beyond the meaning of the lyrics, the sample material also simply works as rhythmic Play-Doh: under Jamie XX’s manipulation, Hall’s vocals add a pleasing texture to the song’s electro beat. However you interpret it, this use of a Hall & Oates sample illustrates Roland Barthes’ idea of a text being a “tissue of quotations.” Barthes went on to elaborate the idea:

“the writer can only imitate a gesture that is always anterior, never original. His only power is to mix writings, to counter the ones with the others, in such a way as never to rest on any one of them.”

Thinking
is a struggle
for order
and at the same time
for comprehensiveness.

Thinking
of the opposite
of that with which
you are directly concerned.

Orient [yourself]
to the central and continuing task
of understanding the structure and the drift,
the shape and the meanings, of your own period.

Do not allow public issues
as they are officially formulated,
or troubles as they are privately felt,
to determine the problems
that you take up for study.

• A video of Alva Noto and Ryuichi Sakamato making music with singing bowls, crotales, and electronics.

• An article on producer Lorenzo Senni.

“Senni’s handling of sound stems from his university days in Bologna. ‘My studies were theoretical’, he says. ‘I wasn’t studying notes or how to play piano, I did this myself, but my studies were about musicology, so basically analysing Bach and Mozart to see why they would put one chord after another.’ This methodology influenced the way he viewed music generally; Senni wasn’t interested in trance as a whole, but in particular parts. He began cutting out the build-ups from tracks and looping them.”

• An article on acoustic prisms.

“The so-called acoustic prism comprises a 40-centimeter-long hollow aluminum case with a series of 10 holes on its side. Within, flexible polymer membranes divide the case into chambers. These barriers vibrate and transmit sound to neighboring cavities with a delay that depends on a sound wave’s frequency. When the delayed waves escape from the holes, they are refracted in different directions so that waves with the lowest frequencies (comparable to red light) can be heard at the end nearest to the source, whereas higher frequencies (comparable to blue light) are refracted farther down the device”.

We are interested in subculture—
in the expressive forms and rituals
of those subordinate groups
who are alternately dismissed,
denounced and canonized

we must seek
to recreate the dialectic
between action and reaction
which renders
these objects meaningful (2).

Subculture
as a form of resistance
in which experienced contradictions
and objections to
this ruling ideology
are obliquely
represented
in style (133). 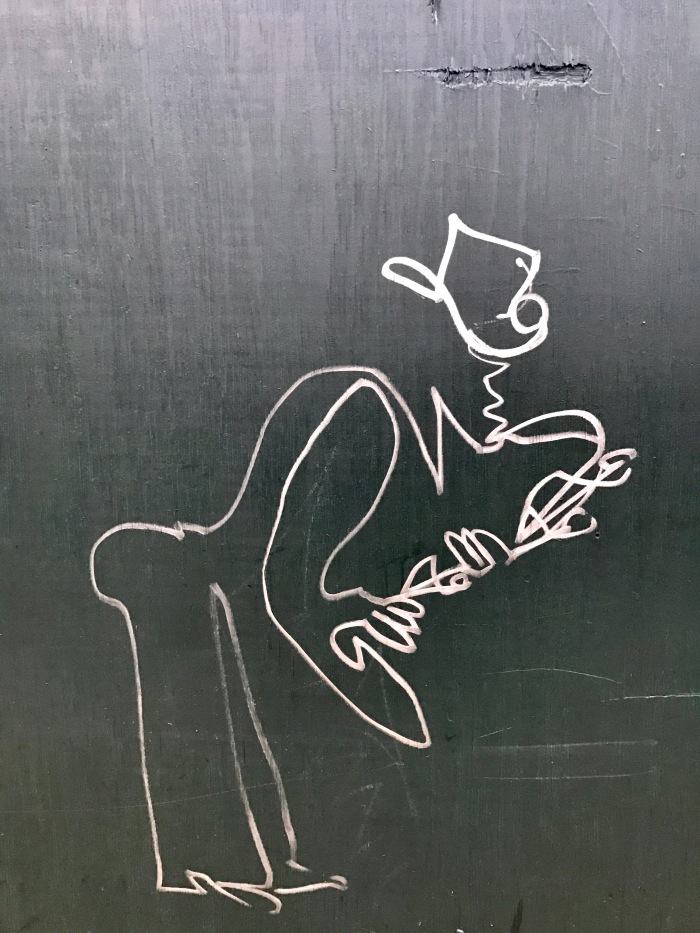 In the concert hall
no one was moving
their body in time
to the music–
not a head nod affirmation,
not even a sway–
only lending their attention
in total stillness.

Which is strange behavior
because this composer’s rhythms,
fours and threes and sixes and twelves,
juxtaposed into poly-layered shapes,
came from African sources
and African contexts,
where music always weaves itself
into the personal,
into kinetic, parallel motions.

The juxtaposition of lively sounds
and solemn listeners
recalled an old book
in which the master drummer
asks the ethnographer,
“But what can you do with this music, this music
taken from its home? You can do nothing with it.”
Yet here was a taken music,
its elements shorn of their sources,
dancing time shapes
echoing
in a new quiet place.

In the concert hall
no one was moving,
their bodies busy tracking
how the African rhythms
were solving new harmonic questions.