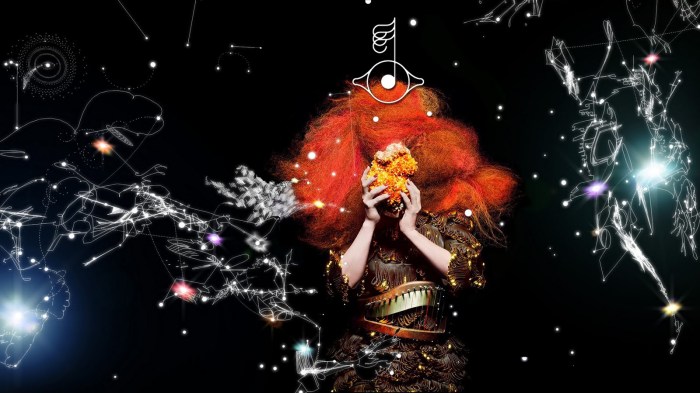 There are a lot of ways to characterize the music of the Icelandic singer/composer/instrumentalist/imagineer Bjork, and certainly the labels “adventurously creative”, “experimental”, and “electronic” come to mind. But these labels inevitably come up short since it’s hard to categorize Bjork’s sonic output; moreover, artistically she achieves the ideal of being an idiom unto herself. If we had to sum up Bjork’s sound and musical approach in one word? Enchantment.

Her recent release Biophilia (presumably) takes its title from E.O. Wilson’s 1984 book of the same name. Biophilia refers to the human instinctive affinity for the natural world. Lyrically, each song on Biophilia explores a different concept relating to the ecology of nature, science and our relationship to these domains. The lyrics are supported musically by a combination of acoustic sounds (such as the harp playing on tracks 1 and 10, “Moon” and “Solstice”, and the organ on track 2, “Thunderbolt” and track 12, “Dark Matter”), programmed electronic sounds, and custom-made electronic-acoustic instruments such as the gamelaneste (on tracks 3 and 7, “Crystalline” and “Virus”) which sounds much like . . . a cross between a gamelan and a celeste.

There are a lot of beautiful moments on Biophilia. For example, “Dark Matter” explores dissonant harmonies over a disturbing drone that refuses to settle into a typical tonic-dominant consonance, preferring to keep shifting its notes towards more angular intervals; the track is powerful because it’s unsettling. One of my preferred tracks is “Virus” which features the clanging gamelaneste, a hang drum (like an inverted steel pan played with the hands–or perhaps it’s a sampled hang drum?), kick drum and sub bass–together sounding like a small factory. Considering that the song compares love to a virus seeking a host body, this factory-like soundscape plays the human body while Bjork’s lyrics represent the virus.

Bjork’s vocal phrasing can sometimes sound odd and a little disjointed but it works because of the singer’s intensity and her commitment to pursuing enchantment. (Plus, when you’re working in a musical idiom of your own design, anything goes!) The lyrics also gain power from the fact that they’re recorded dry–without reverb. This is no small thing, by the way. In our era of auto-tune and infinite effects processing, not too many people choose to approach music making so unadorned. Bjork’s reverb-free, multi-tracked harmonies with their intriguing note combinations are on their own worth the cost of downloading this album.

And Bjork seems to love–and who doesn’t?–sub-bass basslines and sub-bass kick drums built out of mere sine waves. In this regard, she borrows from a sound practice we’ve heard in hip hop for a long time now, originally growing out of a functionality of the Roland TR-808 drum machine that allowed its kick drum sound to be de-tuned into a low-pitched “oooo” sound: using a sine tone sub-bass sound as both minimal bassline and surrogate kick drum.

You can hear Bjork’s powerful vocal harmonies and some sub-bass tones on the song “Moon”:

The songs on Biophilia also exist as individual apps for purchase within the (free) Biophilia app available at the Apple app store. Working with visual artists and software programmers, Bjork has created through these apps an enchanting interactive space for experiencing the sounds and concepts of Biophilia. Each app offers the listener/user several options: watch a visual representation of the music as horizontally moving blocks of color (with Bjork’s voice as a series of bouncing and gliding balls superimposed on the colored blocks); watch a traditional score of the music that scrolls as the music plays; or play an instrument or game designed to go with each Biophilia’s 11 songs. These instrument-games take the ideas of the songs and use them as the basis for new ways of thinking about music making. My favorites are those that allow the user to add and subtract parts to step sequencers that take unconventional not to mention beautiful forms–both visually and musically. (Water flowing through a series of moons at different points in their lunar phases to trigger harp sounds anyone?) The apps also include extended musicological notes by Nikki Dibben that explain the genesis of each song as well its structure through interviews with Bjork and accessible critical music analysis.

Here’s a glimpse of the apps in action:

In all, Biophilia is an energized attempt to expand our notion of what a musical “release” can look, feel, and sound like. The apps are one of the best ways I’ve seen of enabling the listener to interact with the recording’s musical and conceptual materials in a meaningful way. Bjork seems to want to help explain as much as she wants to entertain and that’s pretty splendid, isn’t it? And her ability to continually enchant is a compelling way to inspire us into thinking more about the deep ecology connecting humans, nature, and technology.

2 thoughts on “On Bjork’s Biophilia: Music, Technology And Enchantment”