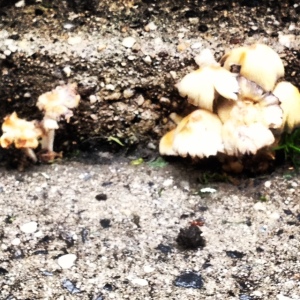 Having recently spotted some mushrooms that were growing in an unlikely place I thought (loosely) about some of the similarities between mushrooms and musical life. Here is what I came up with:

Both mushrooms and musics bear spores of one kind or another. These spores are the reason new species of mushrooms and music can seemingly appear from nowhere overnight, expand rapidly, and colonize a natural or man-made environment.

Fear of mushrooms (fungophobia) relates to a perception of their being abnormal and strange, growing in odd places, and being potentially dangerous. Similarly, musicians have historically been viewed as a somewhat abnormal and strange species (think buskers mostly ignored on the street or even a Paganini or a Hendrix revered for his super-sonic skills), just a rung up the social ladder from jugglers and clowns, yet with powerful and widely admired healing powers too.

A final comparative observation: mushrooms are often foraged by trained individuals known as mycologists who have specialized knowledge in such things. Similarly, music aficionados known as record collectors (or crate diggers) forage for rare vinyl finds in second-hand record stores and thrift shops. For both mycologists and record collectors, I imagine the joy is in the moment of discovery, surprise, or recognition: “Look what I found!”

4 thoughts on ““Look What I Found!”: On Music And Mushrooms”