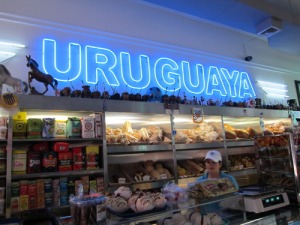 On my last blog post, I may have inadvertently given readers the impression that I wear earplugs wherever I go, so intent I am in the pursuit of some kind of urban quiet. (One worried family member even weighed in: “When you wear the earplugs, do you miss any cautionary sounds–like the sound of an oncoming car?”) Not so! In fact, as I sat in a Uruguayan bakery this morning, it occurred to me that I often flee silence in a deliberate pursuit of noise. And like I said about choosing to be a percussionist–it’s complicated!

But not that complicated. I go to this bakery regularly not because the hot beverages are relatively cheap (though they are, as are the pastries) but because the space offers a level of noise that’s conducive to writing. (Kind of like the subway, where I’m typing these words on a phone.) At the bakery there’s always ambient noise in the form of espresso machines, patrons talking among themselves (in Spanish) and several large screen TVs showing music videos and football matches (also in Spanish). For some reason–including the fact that I don’t speak Spanish, for one thing–all of this ambient sound adds up to just the right degree of din that I can easily tune out. In other words, being surrounded by a mix of different noises helps me concentrate on something else entirely.

And this is what was perhaps misleading about the ear plugs post. Plugging one’s ears means shutting out the sounding world around you. And I do this sometimes–though the shutting out is really just reducing the world by about 33 decibels (if we’re to believe Heroes Earplugs’ health claims). But what’s even more interesting to me is how we shut out or filter the sounds of the noisy world around us simply by concentrating–entering a state of focus that itself benefits from that same noisy world. It’s as if the noises let one part of you know that you’re ensconced in conviviality (noise indexing the lively embrace of social life), which then frees another part of you to relegate the sounds to a background hum and just coast on them.