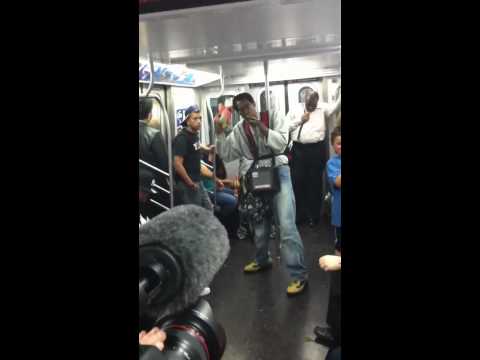 It took all of three minutes, but the guy on the subway was making all kinds sounds with his voice and as I listened to him I couldn’t stop giggling.

Verbal Ace is his name and he’s a vocal artist, a human beatboxer, a singer, a sound effects machine, and mimic extraordinaire. Armed with just a microphone and a small battery-powered amplifier slung over his shoulder, he performs a stand up sonic comedy, leading his captive listeners on a journey through his strange audiophonic obsessions.

Ace’s performance begins with a brief personal introduction and then a throwback to “Axel F”, the theme song to the 1980s movie Beverly Hills Cop. Composed by Harold Faltermeyer, this synth- and drum machine-driven instrumental with its infectious (and cheesy) lead hook used to obsess me to no end. Here’s the original video for the song.

As I hear “Axel F” I smile while frantically searching for the audio recorder app on my phone.

Ace does sound effects too: crickets and an alarm clock to start with and then onto the sounds of the recorded voice announcements heard on the subway. Ace does the woman’s and the man’s voices perfectly.

Now I’m laughing as I check the sound levels on my recording. Actually, there are no sound levels to check! It’s just that I can’t bring myself to look up at this unexpected source of audio humor so I pretend to be busy.

Ace (in the booming and chirpy male announcer’s voice): “The next train will arrive in one day.” And then this: “Thank you for riding the MTA–as if you had any choice in the matter.”

As the train makes its stops, Ace pulls out more tricks to pull in his audience. He interacts with the train’s sounds in real-time–imitating, for instance, the two-tone chime of the doors opening and closing to the point that I’m note sure which sound is the real one.

What makes me laugh is the musicality of Ace’s vocal mimicry. It’s one thing to have an ear for something, and most of us have very excellent ears in the sense that we can recognize the exact sounds of those male and female subway announcers’ voices after hearing them even only once. But few of us can build on our ability to recognize a sound’s distinctive characteristics and then verbally reproduce that sound ourselves. I wouldn’t even know how to begin doing a vocal impression of an alarm clock or a cricket. I know the sounds well but can’t produce them.

Ace also makes me laugh because of his ability to transcend what for most of us are limits to what our voices can do. Our voices are our primary audio stamp, our distinctive timbral profile that completes our physical presence. But Ace’s vocal pyrotechnics suggest, Gumby-like, a more fungible timbral essence; in fact, he seems to become whatever it is he imitates. I laugh because ultimately I find Ace’s uncanny way with sound a little unsettling. Here I am assuming that each of us is has a settled and fixed sonic identity while Ace demonstrates just the opposite.

Here is a video clip someone posted on YouTube of Ace doing essentially the same routine as the one I heard: