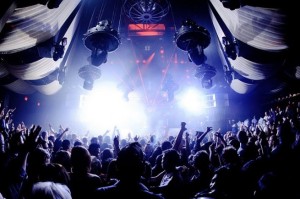 Profiling a Dutch DJ-producer named Afrojack (Nick van de Wall), Eells observes him composing on his laptop while in a hotel room and then on a flight from New York to Vegas. Afrojack uses FL Studio software stocked with “two hundred thousand samples, from synthesizer whooshes to snare hits.” Several passage in Eells’ article are striking in how they capture Afrojack’s working process:

“On his screen, the song…appeared as a series of red and green horizontal bars. Zooming in on a segment representing six seconds of bass, he equalized and compressed the sound to get the timbre he wanted…Nearly an hour later, after replaying the six-second chunk hundreds of times, he took off his headphones. ‘Got it,’ he said.”

And later, on the flight to Vegas:

“The plane was forty thousand feet over western Indiana when he decided he wanted to make a new track. He began with a brisk four-four beat and a repeating phrase that sounded like a theme from a video game. He added string flourishes, whistle sounds, and a shrill, buzzy tone that recalled a fax machine. By the time the plane had entered Nebraska airspace, the song was more or less finished.”

A few interesting things about these passages. First, Afrojack, like many EDM musicians, treats composing as a kind of combinatorial game, choosing from among thousands of sound samples and loops to generate new material. His musical labor lies primarily in listening for striking juxtapositions of already performed and recorded sound bits. Second, he uses his software not only as a vast sound archive from which to draw but also as a mixing board that allows him to shape sound just so. In other words, the software enables him to be an engineer and producer as well as composer. Or more to the point: engineering/producing/sound design becomes part and parcel of the composition process.

Afrojack’s composing at 40,000 feet may also be an apt metaphor for the high-flying, soaring quality of the EDM scene in Vegas. Indeed, Eells’ article concludes with Vegas concert promoters and DJs alike wondering if and when the superstar DJ phenomenon may cool off or vanish altogether. Is this oversized, visceral music–a music intended to move its audiences to momentary excess–sustainable? Or do some bright things eventually fade to a lesser glow?

You can read a critique of Eells’ article at Gawker.

Finally, here is a Dutch documentary about Afrojack. At 8:38-8:55, the DJ demonstrates his “bleepy” sound. “It’s very weird”, he says about the sound, “and that characterizes my style.”