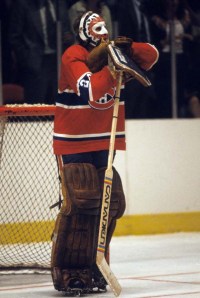 When my brother and I were kids, we spent a lot of time playing ball hockey in the driveway, taking shots at one another with a fluorescent orange “sting” ball that really did sting when it was frozen from the cold and hitting you in the face. One of our always followed conventions of the game was that we would announce which famous player we were that day, and both of us always wanted to be “Dryden”–as in Ken Dryden, the goalkeeper for the Montreal Canadians during the 1970s. Dryden was an iconic figure for us because of his great athletic skills and his mysterious identity hidden behind that tribal-looking protective mask he wore while playing. A superhero with precision reflexes who stopped pucks like no one else, Dryden captured our imagination.

In his stellar sports memoir-ethnography, The Game (1983/2013), Dryden renders with lazer detail his experience playing his last season with the Canadians. It turns out that during all those games when his teammates were dominating their opponents at the other end of rink, Dryden, alone in his goal crease and leaning against his propped up stick, was observing and thinking about everything going on around him on the ice. In many ways, The Game reads like a micro-study about the performing artist and human behavior. Dryden conveys the mix of attention, anxiety, and flowing, in the moment thinking/non-thinking often felt by expert performers at one time or another in their work. But unlike many a memoir, Dryden backs up his personal observations and reflections with deep historical perspective on the past, present, and future of his sport. Most athletes and performers don’t have the ability or interest to get outside themselves like that–to see, describe, and analyze the contexts in which they work. In this way, The Game provides a masterful insider’s view of dozens of different people, situations, and dynamics, while maintaining a guiding authorial voice.

Speaking of voice, sparkling here and there in Dryden’s text like little gems are sentences that articulate new ideas, have affect, and provoke thought. Reading them as gems of advice, here are a few that I enjoyed:

Then the present slowed down and the future changed direction.

It had to do with what he did and what he didn’t have to do because of how he did it.

It is in free time that the special player develops.

He invents the game.