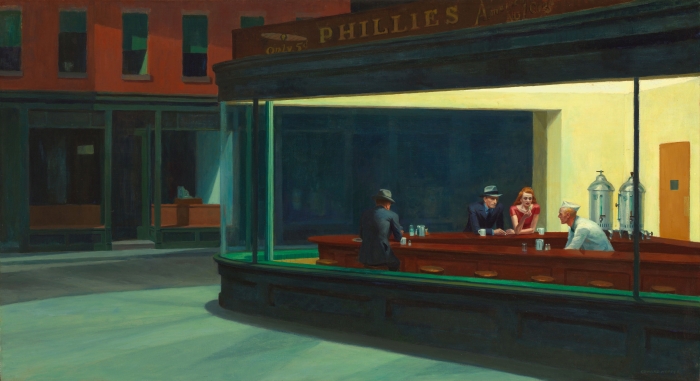 Edward Hopper’s most iconic painting depicts several people in a city diner late at night. As with much of Hopper’s work, the mood of the scene is desolate, empty. The people seem more like concepts than characters, their individual life stories forever hidden  from our view. In the Hopperian world, time itself is frozen.

DJ Richard, originally from the coastal town of Portsmouth, Rhode Island (which, by the way, is not far from the Cape Cod settings depicted in many of Hopper’s other paintings) makes a kind of techno that evokes its own kind of desolate night scene. There are just a few sounds in Richard’s “Nighthawk”–a three-note pulsating chordal drone, some hints of low bass, and a repeating single note melody. The star of the texture is the percussion–a syncopated, jagged weave of synthetic Roland TR-909-esque kick drum, snare drum rim click, handclaps, and hi hat cymbals sounds–none of which articulate the conventional four-on-the-floor beat.

This is where the juxtaposition between Richard’s music and Hopper’s painting begins to come into focus, bridging the seventy-four year gap between them. It’s not just the outward or surface mood of loneliness that these two works share. Underneath both of them is also a deep sense of absence. In “Nighthawk” Richard’s percussion play what sounds like a continuous drum fill whose tensions never resolve themselves, suggesting the pulse of the underlying 4/4 beat without ever playing it. The drone, the bass, and single melody note do nothing to resolve the music’s rhythmic tensions. As we listen we’re held suspended, waiting for something that never arrives. Similarly, in Hopper’s “Nighthawks” we feel the palpable silence of what is about to unfold but never does–in the uncertain back stories of the characters in the diner, but also in the details around the painting’s focal point such as the street intersection, the buildings in the background, and indeed, in the perspective afforded by Hopper’s point of view. He has set us up to look in on the scene–to know things the characters in the scene do not. All this raises questions: When assessing a famous painting or piece of music what do we know and how do we come by our knowing? How does seeing shape how we listen, and listening shape what we see?