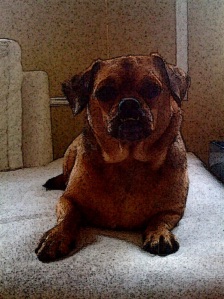 “Not muteness: absence of linguistic noise.”
— Alexandra Horowitz, Inside Of A Dog

We have a very, very quiet two-year old dog named Sadie.  Sadie hardly ever makes a sound, except when she sees a life-size furry animal on the TV, whereupon she lets out a combined growl-bark.  But otherwise, Sadie is a study in quietude.

I spend a fair amount of time with Sadie during the day, walking her outside in the neighborhood and hanging out with her inside the apartment.  And I talk to her a lot, which leads to a lot of awfully one-sided conversations:

Me: (with genuine excitement) “Wanna go for a walk?!”

Sadie is, of course, communicating with me all the time through her body language, especially her eyes which always look like they’re trying to deeply understand what makes me tick.  But lately her silence has been intriguing me more and more.

Quiet beings like Sadie have a way of making comparatively chatty beings like me think twice about their utterances.  When your voice is greeted with silence, you do a quick mental replay of what you just said or else repeat the utterance–as if repeating what you just said would actually make a difference and elicit something more than silence from your quiet friend.  But Sadie will absorb anything I say into her deep cloud of quiet, sometimes causing me to go quiet myself.  After all, as Alexandra Horowitz observes in her book Inside Of A Dog, “it is when language stops that we connect most fully” (119).  All of this to say that Sadie and I usually get into a quiet space together, and I find that her silence compels me to listen more closely to the ambient sounds around us.

Last year, my wife put together a Sadie video montage for which I provided some music.  The video projects a narrative onto Sadie’s silent cognitive world by way of a poem called “À une passante” (“To a Passerby”) by the French poet Charles Baudelaire (1821-1867).  (The French voice is courtesy of an online text translator/reader.)