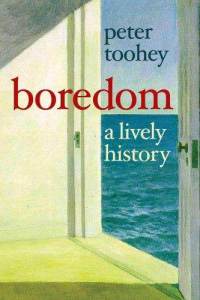 One of the symmetries between the psychological state of boredom and the experience of listening to music is that they both shape how we feel time.  In his book Boredom (Yale University Press, 2010), Peter Toohey quotes the poet Joseph Brodsky speaking of boredom as representing “pure, undiluted time in all its repetitive, redundant, monotonous splendor” (186).  Elsewhere, Toohey also discusses how music is a “powerful source of enrichment and stimulation” (177) that reliably keeps boredom at bay.  (In one study cited by Toohey, playing classical music significantly reduced boredom-fuelled abnormal behavior in elephants.)  How interesting, then, that Brodsky’s characterization of boredom as “repetitive, redundant, monotonous splendor” seems to equally apply to a lot of music that we find appealing. (Or at least that I find appealing.)

We often use the aural splendor of music to avoid boredom and structure time in our lives because music seems uniquely suited to the job.  The musicologist David Burrows has written eloquently on music’s role in the temporalities of our lives.  In his pioneering articles “Music and the Biology of Time” (1972), “A Dynamical Systems Perspective of Music” (1997), and his recent book Time and the Warm Body (Brill, 2007), Burrows suggests that music offers a kind of virtual modelling of our experience as living beings constantly in pursuit of a stable yet dynamic equilibrium.  Whatever else music may be–notes on a page, cool chord progressions, political tool or sonic signifier of social relationships–it’s also, when you get right down to it, a perceptual technology for helping us understand the flow of time as we live it. Consider that music, notes Burrows, “takes place in its own almost total sonic absence”, creating “a now whose content changes ceaselessly” (1997:529).  Music, then, is not a thing but a process that is constituted through encounters between sounds and their listeners–encounters that allow us to virtually inhabit one kind of temporality or another, experiencing time as an ongoing present and a series of linked moments.

But back to boredom.  How is it that attributes of our lives we find boredom-inducing–again, think about repetition, redundancy, and monotony–can create pleasure in the context of music?  Is it because musical experience is such a clearly bounded space where we accept what would otherwise be maddening in non-musical contexts? Similarly, how is it that music licenses all kinds of behavior–singing, clapping, whistling, dancing, acting euphorically–that would be awkward in everyday, non-musical contexts?  If music is, as Burrows suggests, a kind of virtual modelling system, then perhaps we embrace its mobilization of say, repetition, in tacit agreement to be guided and taught some of its potential aesthetic uses.  In this case, music can teach us that repetition need not be boring, static and monotonous, but rather invigorating, transformative and lively.