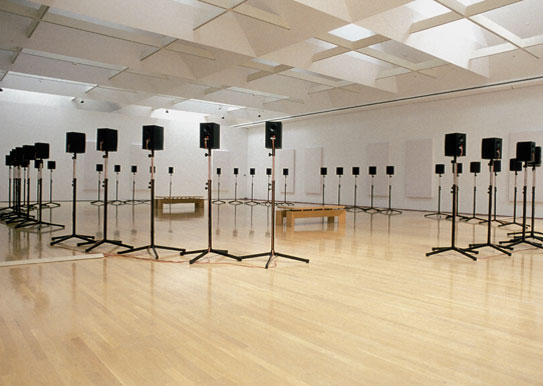 When you go up to the second floor of MoMA PS 1 in Long Island City, Queens and walk down the hallway you can already hear the ethereal floating voices of Canadian artist Janet Cardiff’s sound art exhibit coming from a large room around the corner, beckoning you to take a closer listen.  Walking into the room you see eight groups of five loudspeakers, stand-mounted at ear height and facing inwards, tracing a perimeter around an invisible oval.  Keep walking into the middle of this speaker array and you find yourself buoyed by the glorious surround sound of forty recorded singers.  The music stops you in your tracks and makes you think and feel anew, prompting a reflective state of mind.  Listening while looking out the gallery’s windows where I could see in the distance traffic crawling silently on the Long Island Expressway against a bright blue sky beyond, time seems to come to a standstill.  This music sounds like maybe it’s been playing continuously for hundreds of years–we just haven’t been paying attention.  What is this?

Cardiff’s Forty-Part Motet (2001) is a looped recording of English composer Thomas Tallis’s Spem in alium (“Hope in any other”), a sacred motet composed around 1570 and scored for eight choirs of five voices each.  Cardiff made a multitrack recording of the Salisbury Cathedral Choir singing this powerful piece of Renaissance vocal polyphony, with each singer on his or her own audio track.  On playback, each singing voice is assigned to a single speaker, creating not 5.1 or 7.1 surround sound but a forty channel stereophonic experience that has tremendous, almost hyper-real sonic clarity.

Forty-Part Motet gets the relationship between form and content just right.  The music of Tallis is an ever-shifting dense sound mass that draws you into its unresolved tensions and reminds you of just how powerful tonal harmony can be. Using techniques such as imitation and call and response between each five-voice choir that throw the sound around the gallery space, as well as moments of simultaneous intricate individual part singing, Spem in alium easily holds your attention for its eleven minute duration.  At MoMA, I watched how the music had other gallery visitors riveted too.  There were eleven of us in the room, some sitting on the benches in the middle, some walking around the perimeter traced by the speakers, some standing frozen, facing one side or another, as if at attention. One woman gestured to her companion to look at her arm moments after they entered the space: she already has goosebumps!  And I spoke with a security guard who spends the day standing in a corner of the room, listening.  He told me that “When I first started working here, I noticed people would come in and start crying.  At first I didn’t know why, but then as I listened to it I started to understand.”

Cardiff presents Tallis’s musical content in the perfect vessel too.  With each voice assigned to a speaker, the exhibit is a super choir with unmatched musical clarity.  To my ear, the volume of each speaker is also a tad higher than a real singer would be, heightening the voices’ articulation even more. And just as important, Cardiff’s speaker arrangement invites the listener to take part in actively shaping his or her listening experience.  For example, stand in the middle of the speakers and you’re in the middle of the choir, the disembodied voices coming at you from all directions like focused rays of light emanating from discrete points around the room.  But start walking around and the sound mix changes accordingly. If you move in close to a speaker, it sounds like you’re turning up that channel of the choir “mix” and suddenly that speaker’s voice is highlighted and right in your face.  And because it’s a speaker, the sound momentarily obliterates the other voices in the choir. It feels intimate–like looking out through a one-way mirror at a singer who can’t see us standing so close and listening.  If you keep moving steadily from speaker to speaker, the scene plays itself out over and over, one voice highlighted for a moment, only to vanish again back into Tallis’s sound mass.  I even spent some time behind one of the speakers and was struck by how much it felt like I was standing behind a real person singing, his voice muffled because the speaker’s front (mouth) was facing away from me. (Admittedly, the other reason I was also hanging out behind the speaker was to consider whether or not I could get away with breaking museum rules and take a clandestine photo.  Couldn’t bring myself to do it though . . .)

Here is Cardiff discussing the work:

“While listening to a concert you are normally seated in front of the choir, in traditional audience position.  With this piece I want the audience to be able to experience a piece of music from the viewpoint of the singers. Every performer hears a unique mix of the piece of music.  Enabling the audience to move throughout the space allows them to be intimately connected with the voices.  It also reveals the piece of music as a changing construct.  As well I am interested in how sound may physically construct a space in a sculptural way and how a viewer may choose a path through this physical yet virtual space.

I placed the speakers around the room in an oval so that the listener would be able to really feel the sculptural construction of the piece by Tallis.  You can hear the sound move from one choir to another, jumping back and forth, echoing each other and then experience the overwhelming feeling as the sound waves hit you when all of the singers are singing.”

And discussing the power of sound in general:

“One thing that interests me is the intimacy of sound.  We have much more filtration when we look.  We turn off.  Sound comes immediately and it’s hard to stop it.  It enters your consciousness much more easily than the visual.”

Cardiff’s piece then, invites ambient surround listening, close focused listening and mobile wandering listening.  The only disconcerting aspect of the work is that the voices were recorded close-mic’d and thus dry and without reverb, giving them a clinical, disembodied sound.  Whatever resonance they have comes from the natural reverberation of the gallery space, which helps bring them to life.  But whenever one of the five voice choirs falls silent en masse, it sounds like their respective channels are momentarily muted (perhaps to preserve sonic clarity in the mix?) and their corresponding speakers just go dead, as if the power went off. Amazingly, one’s ear notices this subtle shift from virtual “liveness” to virtual “deadness” and it’s unnerving. Maybe the reason is that it’s a moment of rupture that breaks the spell of Cardiff’s work and reminds the listener that the power of sound reproduction technology to resurrect four hundred year old music is not without its limitations.

But Cardiff plays with sonic rupture too by foregrounding the technology in a playful way.  At the end of the performance loop of Spem in alium, there’s a three-minute pause of non-music before the loop begins anew. But this pause is in fact the three minutes preceding the choir singing–that is, it’s those moments when the singers are standing around and waiting to actually the piece.  And if you happen to be in the gallery space before the music has started up again and put your ear up to one of the speakers, you can just about make out bits of conversation: a young boy talking to his friend about a cool new toy he just got, or an older man inquiring about the new job of his colleague (“…that’s a full-time job isn’t it?…”).  Within moments of figuring out what was going on, I pressed my ear up against several speakers, desperate to learn more about the real lives of these real singers trapped inside of these cold speakers.  I was struck by the playfulness of Cardiff choosing to include this casual pre-performance chat into the fabric of Forty-Part Motet.  In doing so she not only foregrounds the technology that allows her piece to come to life, but also reveals its powers to turn us listeners into eavesdroppers.

Below is a YouTube clip of the piece.  The spatiality of its sound is quite good if you listen on headphones.