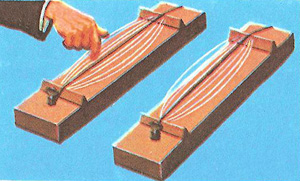 sympathetic resonance –a harmonic phenomenon wherein a formerly passive string or vibratory body responds to external vibrations to which it has a harmonic likeness (Wikipedia).

In his article “The Talk That Does Not Do Nothing” in the July/August 2012 issue of The Believer (The Music Issue), Peter Coviello writes about fighting with a friend over the merits of Steely Dan’s music. Their rambling discussions take place over the course of twenty years, and one of the issues they argue over is whether or not there is a recurring character portrayed in Steely Dan’s lyrics. As it turns out, there may well be such a character and Coviello expertly parses the textual connections among different songs to make his case. Along the way he also renders the experience of his Steely Dan discussions to show what being a devoted music fan is all about.

One of the ways fans express their fandom is by talking about the stuff they love with their friends, explaining and arguing over its virtues, what makes it work so well (or not so well), what makes it important to them, and so on. In the second half of his article, Coviello shifts into deep analytical mode and provides us with an excellent overview of the nature and purpose of criticism in general:

“I’d like to say, then, that what you’re doing when you’re fighting about slight, useless, beautiful things you love, is, in effect, criticism–if we can torque the idea of the critical enterprise hard enough so that it takes seriously the joyousness, the inflooding sense of richness and abundance, by which we are sometimes possessed both in the presence of an object and also in and through the talking with others about the object and its captivations. (…) Criticism might also be understood as the making of a language–and with it the making of a special, precious kind of sociality, fractious and lovestruck–whose roots are in ardor and captivation, something kindled by those moments of exhilaration that songs so commonly produce. (…) Talking [is] the mode of joy’s enlargement, its enactment” (10).

There are a number of exciting points here. I especially like the idea of criticism as a special kind of talking about that which captivates us in something, as a “precious kind of sociality” that frees us to create a unique language for our talking/writing, and also the idea of criticism as a way to enlarge the joy we have already experienced through say, music, art, or in a book. Taken together, these ideas on the functions of criticism reinforce a notion that I’ve had for a while: the critic–amateur or professional, it doesn’t really matter–as someone who puts into words the texture of his/her co-resonance with whatever it is that seems worth writing about. To use a sound analogy: we’re vibrating in sympathy with a tone that has already sounded and now we want to extend that resonance, amplify it, and let it keep ringing through ourselves and hopefully out towards others too.