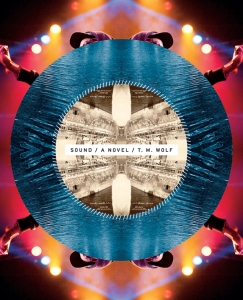 T.M. Wolf’s Sound is a novel that merges writerly form and narrative content to approximate the ambiguities and instabilities of how we think and talk–not in books but in the real world. Content-wise, Sound‘s story is simple enough: Cincy Stiles, a disaffected philosophy graduate school drop out, returns to his hometown on the Jersey shore to take a job at a boatyard as a supervisor of a small crew of new hires for the summer. During this time, things happen: Stiles explores the shore and its old haunts, hangs out with his housemate, Tom, a musician, and falls for a mysterious woman named Vera who keeps disappearing from his life and then showing up weeks later. Meanwhile, the boatyard is being watched by Jersey undercover police, who eventually bust one of Cincy’s new hires on drug charges. By the novel’s end, Cincy is no closer to a career path or the mysterious Vera, but he has begun to write and tell us his story.

That’s the essence of Sound‘s plot. But it’s the form of the book that is complex and resonates strongly for musically-inclined readers, for much of Sound is laid out like a musical score. Taking inspiration from the verbal wordplay and flow of hip hop as well as the graphic scores of experimental composer John Cage, Wolf places all of his book’s dialogue within sets of horizontal lines that function as a simplified musical staves. These staves allow the reader to see Wolf’s dialogue “orchestrated” in different vertical slots, from high to low, as well as in various horizontal positionings that convey the timing and rhythm of the voices as they interact, overlap, question and answer one another. Wolf also uses various typeface styles and sizes to represent and convey the different voices, affects, and personalities of his characters. In short, the use of graphic techniques make Wolf’s writing literally a kind of musical object–an object fueled by the musicality of speech as much as by its meaning.

Positioning the story’s dialogue on musical staves has a lot to recommend it. Most importantly, it lends the voices a precise temporality: as you read, you experience the uneven tempi of characters speaking as they respond to one another in conversation, pause, and sometimes even go silent for a stretch (which Wolf indicates by using empty quotes: ” “). It’s fun to read voices on a staff because they draw you along their rhythm–which tends to move at a fast clip. The layout of the dialogue also allows its underside to sing in the form of characters’ un-voiced memories and contradictory thoughts that co-exist and appear simultaneously with the voiced conversations. There is something strikingly realistic about this juxtaposition of the words spoken and ideas thought; indeed, Wolf has captured how most of us think most of the time. We might sound coherent to one another, but our minds are constantly playing with a multitude of ideas and juggling our thoughts behind the scenes. In some places, Wolf incorporates ambient sounds into the dialogue as well. For instance, we see the voice of the baseball announcer giving a play-by-play of a Red Sox game, or the lyrics of the rap song that booms on the radio in a car. These radio voices are a backdrop to the main dialogue, but they also dovetail with it to create counterpoint, fill in spaces, and frame meaning. As you read, you can’t help but wonder how the characters might be influenced by what they hear as they talk.

There are, however, limitations to notating all of Sound‘s dialogue on staves. For one thing, the flow of the reading experience is broken because as we read we need to start and stop, go back, vertically scan the staff from top to bottom to make sure we haven’t missed anything. This wouldn’t be a problem if we were only listening to the voices. But reading this way–polyphonically, like reading a fugue–is laborious because we don’t read the way we listen.

But this is a small shortcoming. If you stick with Sounds, the reading gets quicker and the density of Wolf’s polyphonic dialogue begins to sing. I appreciated, for instance, how the different typeface styles and sizes he uses convey what the ear would easily hear without needing an explanation. Case in point: one bit of whispered talk is rendered in a microscopic font and the effect–helped by how easily our eyes can interpret physical smallness as acoustic quietness–is more affective than simply telling us that a character has just whispered something. In other places, Wolf tries other tactics: he includes a list of few dozen search terms from Cincy’s Internet search free-floating without a musical stave for support which makes them stand out in an unusual, clinical way (260); he depicts a flurry of memories as short phrases written slightly crooked over a huge, 21-line stave (247); he shows the noise of a character’s conflicting thoughts by superimposing layer upon layer of word streams to the point of being unreadable (343); and near the end of the book, he graphically represents the sound of a house party’s booming sound system through large grey blocks that look like maxed out sound waves (304-312). If there is a meta-theme throughout Sound, it’s that coherent meaning is always on the verge of getting fuzzy, always on the verge of being swallowed by noise.

In sum, there’s a lot going on in Sound besides the story, and much of what’s going on is quite musical. For it’s not only the borrowing of staff-style notation as a structural device that alerts us to Wolf’s sonic leanings. He’s also a fan of musical loops and intrigued by the ways in which our memories are engaged by music. Loops, in a hip hop context, consist of audio samples of older recordings–a snippet of a voice, a shard of a drum break–that play over and over again. The repetition transforms the loop into something Other (and usually something groovy) by revealing meanings not heard in the once-played-through original. Similarly, our memories are like loop players that constantly revisit the past–from a few minutes ago to decades ago. And when we replay in our minds, like Cincy does, the stuff of our immediate and deep experience, we transform that too–like a kaleidoscope remixing a scene into new combinations of colors. All this to say that what is ultimately most impressive about Wolf’s novel is how he renders the musicality of the everyday by depicting our talking and thinking as the strange loops that they truly are.