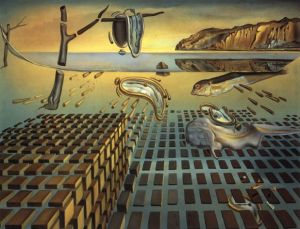 There is something unsettling about Salvador Dali’s The Disintegration of the Persistence of Memory (1954).

On the face of it, it looks like an outdoor scene composed of water, sky, and mountains.

But what about those rectangular blocks and melting clocks?

The blocks convey one time sense moving forward in an orderly way. But the blocks encounter several melted clocks along their path, suggesting perhaps that time is not as “straightforward” as the blocks’ orderliness might suggest. (Melting clocks first appeared in Dali’s earlier 1931 painting, The Persistence of Memory.)

The image also depicts underwater and above water scenes. Yet a glance to the far left of the image reveals that what appeared to be a water line is in fact just a cloaked surface pinned up to some trees that are themselves without grounding.

So what is holding everything together?

Behind the rectangular blocks moving in an orderly way, behind the underwater and above water scenes, and behind the mountains, is a blank field of being. Sky and water now seem like apparitions.

There’s nothing holding this together.

Surreal? Certainly. And thought-provoking too.