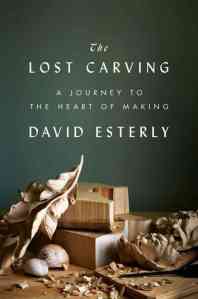 “On go the hands.” – David Esterly

In his book The Lost Carving, David Esterly describes in luminous detail his experiences in the art of decorative wood carving. In the mid-1980s, Esterly, a self-taught carver, worked on a year-long restoration project at Hampton Court Palace, a royal estate in England, to repair and re-carve some decorative carvings by Grinling Gibbons (1648-1721) that had been damaged in a fire. Gibbons is widely considered England’s most skilled wood sculptor and carver, famous for his elaborately filigreed reliefs of flowers carved in limewood.

Esterly kept detailed journals of his restoration work at Hampton Court, and The Lost Carving is a memoir about this experience and how it led the author to a deeper understanding of Gibbons’ techniques and artistry. Part craftsman, part naturalist, part artist, part writer, part art historian, and part phenomenologist, Esterly effortlessly assumes many interpretive stances and brings together a dizzying array of thematic strands in a literary way to shape a story that itself seems carved, so deliberate are its threads. His writing is a deep pleasure to read.

What interests me most in The Lost Carving are its finely wrought descriptions of what it feels like to carve and the complex decision-making in the activity “where the body hypnotizes the mind and vice versa.” There is a lot here about the two-way relationship between action and theory–between doing something and simultaneously asking questions about that doing. The work requires tools and know-how and also creativity and continuous problem-solving–the results of which only appear over time. As Esterly observes simply about this ongoing learning process: “The quality of my errors improved.”

In some ways, wood itself is the star of this book. It’s wood’s materiality, after all, that guides the author in his pursuits and keeps him coming back to keep improving his craft. “The wood is teaching you about itself, configuring your mind and muscles to the tasks required of them (…) The wood instructs the tool in its motions.” The complexities of the wood requires the carver to work “from the bottom up, not the top down.”

I also appreciated how Esterly gets at the underside of what makes compelling sculpture work. Literally speaking, “What you don’t see influences what you see” he says. And a “crucial part of the appearance of an object is the point at which it disappears from the observer’s view.” Reading as I usually do with musical things in mind, I thought about all those hidden parts of musical practice that we don’t necessarily hear per se, but whose presence can be felt by an attuned listener. After all, both music and sculpture are three-dimensional–each with a depth that’s there even if you don’t think you hear it or see it.

In sum, Esterly shows that it is possible to both practice a craft and write seriously and compellingly about it, without one activity compromising the other. The author went looking for Gibbons and found something bigger–the craft of carving itself. “The golden key to the carving was the carving” he tells us. “Gibbons wasn’t the giant whose shoulder I was riding on. The giant was the act of carving, the profession itself: the making of a carving, the making of anything. Making itself.”