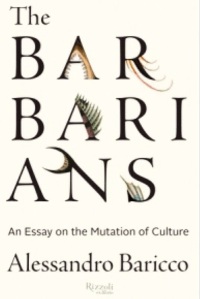 “I had grown up with a different head, an old-fashioned one, and that sea of possibilities and different tasks seemed to me like something cooked up for people other than myself.” – Alessandro Baricco

Last year I noticed a book for sale at, of all places, the checkout counter of the food emporium Eataly. The book was The Barbarians: An Essay On the Mutation of Culture by the Italian novelist Alessandro Baricco. I made a note to check it and finally did so last month. The Barbarians is a timely, playful, and compelling essay about what could be described as a global shift in consciousness regarding high and low culture, the flow of information, knowledge, and how we think. Through a series of brief case studies on wine, soccer, books, Google, and even music, Baricco suggests that we are becoming “mutants: with a changed orientation to the world–one whose sensibility is more attuned to surfaces than depths, simplicity rather than complexity, and simultaneity rather than singularity. In a way, the book is like a field manual that describes not just technological trends, but also the emergent cultural spaces defined by them in which more and more of us find ourselves. Here and there Baricco uses the metaphor of a half-human, half-amphibian mutant that has grown gills in order to breath underwater. That’s us.

Baricco’s first case study is wine. He describes the global impact of American winemaking and the numerical wine rating system. Once upon a time, not that long ago, wine was the domain of the Europeans–particularly the French and the Italians. Then in California there developed “Hollywood” wine–Baricco’s term for what was essentially “an effective gutting of a refined, complex cultural tradition.” Hollywood wine is an example of a gesture that is preserved but whose meaning and depth have been diluted. Part of this was due to a technological revolution (air-conditioned wine ageing facilities) that erased “the privileges of the caste that resigned supreme in the art.” This was a new world co-opting of an old world tradition, re-making winemaking in a simpler, modern language of taste. “This wine” says Baricco, “negates one of the principles of the aesthetics we embrace: the idea that to attain the high nobility of true valor, one must travel a tortuous path of patience and learning.” The Barbarians’ Hollywood wine tastes good (enough), opening up what was formerly an elite tradition to the regular person, and ultimately, helped affordable wine drinking go global.

From wine, Baricco moves to contemporary soccer, whose style of play derives from the Dutch “total soccer” begun in the 1970s which he describes as “a single event in which everyone is constantly participating.” Where soccer once had individual “genius” artists who could command the pitch and direct the attention of other players, the game is now characterized by a “middlingness” or “a smooth, unjointed structure able to hold together a greater number of actions.” Baricco contends that middlingness is in fact an envoy that “allows ideas and actions to circulate faster through the system; genius, deep within the noblest of individuals, breaks up this rhythm.”

Like Hollywood wine and the modern style of soccer play, Google is also a creature of the Barbarians and here Baricco is at his most probing as he circles around the question of meaning as it is constructed and found online. On the Internet, he says,”an idea is not a circumscribed object, but a trajectory, a sequence of passages, a composition of diverse materials.” Meaning is not something we work for, but rather something easily accessible, fluid. It’s “as though Meaning, which for centuries was linked to an ideal of permanence, solid and complete, had gone out in search of a new habitat, dissolving into a form that is mostly movement, extended structure, journey. Asking oneself what a thing is means asking oneself what road it has traveled outside of itself.” In the searchable world of Google, the ideas and knowledge formations that matter are the ones “able to enter into sequence with all the other areas of knowledge.”

Baricco’s discussion of meaning leads him to consider what constitutes experience today. He contrasts old and new (or Barbarian) conceptions of experience. The old idea of experience is as “a high point in everyday life–where the perception of reality crystallizes into milestones, memories, stories.” Experience in this sense is a vertical “journey into the depths” that “stemmed from the ability to get close to things, one at a time, and to develop an intimacy with them that might open up their most hidden recesses.” The new idea of experience is a journey along the surfaces of things to “generate rather than gather momentum” in order to get somewhere else. (Think about the Googled link.) Experiencing things “becomes passing through them for the time necessary to draw enough impetus from them to end up somewhere else.” The goal, says Baricco, “is now movement itself.”

The Barbarians also considers the history of European classical music as one of its case studies. Baricco suggests that classical music’s development lead, on the one hand, to an ongoing simplification of its language. Baricco:

“You could say that, between Bach and Beethoven, composers worked tirelessly at cleverly simplifying the world of music they’d inherited from their forebears. They diminished the sounds, harmonies, and forms. And at the same time they accelerated down the road of a spectacularity no one before them had ever dreamed of. If you listen to a madrigal by Monteverdi and then, immediately afterward, the chorale finale of Beethoven’s Fifth, it will become immediately clear on which side stands the shopkeeper, the uncivilized, the barbarian. And yet…in that voluntary reduction of possibilities…those men found the narrow strait through which they would discover a new world…”

On the other hand, it could be argued that classical music also sonically constructed the notion of spirituality. Going back to the sixteenth century, Baricco observes that musics of the 1500s and 1600s are sometimes attributed “the same qualities we have learned to recognize in the likes of Beethoven and Verdi…But in reality, it’s an optical illusion…The map of sentiment, such as we have inherited it, had yet to be invented at the time.” It was only later that the musical language from Bach and Haydn to Beethoven and Mozart (among many others) set the parameters for apprehending the spiritual, for apprehending the soul through sound–not just for the nineteenth century bourgeoisie, but into our time too. It was classical music that linked spirituality and soul to the music’s steep learning curve. Understanding classical music, Baricco reminds us, demands “hard work–time, erudition, patience, diligence, willpower.” Over time, this process of study has “been refined into a veritable discipline, highly complex and of difficult access.” Only when you consider how many hours it takes to become what Theodore Adorno once called a “discerning listener” says Baricco, “do you realize how consistently every other way of approaching the supreme masterpiece has been demonized.” In short, classical music teaches us that “without profundity, there is no soul.”

By the time we have moved through the case studies on wine, soccer, Google, and music, Baricco pans out to provide some general descriptions of the barbarians through a few defining characteristics. First, barbarians “invented the horizontal man” who travels the surface of things rather than “plumbing the depths.” Second, the horizontal person is a “kind of sensor pursuing meaning wherever it lives on the surface, following it everywhere.” Meaning is “distributed across the surface of things, or surfing the waves of experience, of a network of systems of passage.” These systems of passage in turn “generate acceleration.” A third characteristic of barbarians is their view of the past as “a junkyard of ruins” that “rises back to the surface over time and enters into a network with the shards of the present.”

There’s a lot to like in this imaginative and thoughtful book. The Barbarians is packed with unusual and probing insights about the presence of contemporary culture. And though he doesn’t say it outright, Baricco’s broader point is that the barbarians are us–each of us, wittingly or not, involved with the “systematic dismantling of the entire intellectual armory we inherited from nineteenth-century Romantic, bourgeois culture.” But Baricco’s essay isn’t nostalgic for our pre-Barbaric era. Instead it urges us onwards by mapping our time of global simultaneity, interconnectedness, and digital energy flows to which we are fast adapting. “We are mutants, all of us, some more evolved than others.”