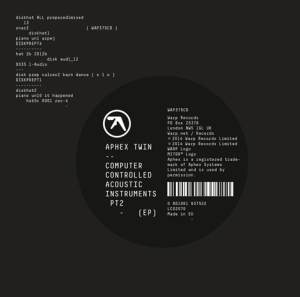 Quick on the heels of last fall’s Syro, Aphex Twin, aka Richard James, recently released an EP of computer-controlled acoustic instruments, titled appropriately enough, Computer Controlled Acoustic Instruments pt2. I had heard about James’s collection of such instruments and even saw a photo somewhere of a snare drum attached to which were metal claws holding drumsticks. So I was curious to hear what all this gear sounded like.

It sounds compelling. As with Syro, James puts the catchiest, most song-like track up front. “diskhat ALL” has a back beat, a bassline of sorts (played on some kind of prepared piano sounding like Indonesian gamelan), textures that vary from moment to moment, and an ABA kind of form. The music is vaguely Frankensteinian, conjuring a lab in which old instruments find new life when attached to MIDI-speaking computers.Two of my favorite pieces are brief ones for snare drum and piano. The snare drum piece, “snar2” is little more than a slow to fast roll that moves around different areas of the drumhead. What makes the roll interesting is how it sounds both realistic–because this is a real snare drum, after all–and also synthetic–because human hands don’t usually accelerate to this degree in this precise a way. (Or maybe I should get practicing?) The piano piece, “piano un1 arpej” consists of super-fast runs up the piano that abruptly stop and blossom into moments of chordal repose, repeated a few times. As with the snare drum piece, there’s something non-idiomatically-what-a-piano-player- would-play going on here. But James makes it cohere. Maybe the chords he uses offsets the inhuman speed of those runs?

You can listen to these tracks over at bleep.com.

Overall, listening to Computer Controlled Acoustic Instruments pt2 refreshed for me why I still prefer the sounds of acoustic instruments over electronic timbres. They’re simply richer and more evocative. (Read more about my frustrations with electronic sounds here.) Having said that, I also enjoy the groove of electronically driven, MIDI-controlled sequences and beats. Machines have an interesting funk to them–even if part of that funkiness is the result of our projecting onto them more meaning than their grooves deserve. Finally, listening to this music had me thinking about the voice of a performer/composer/acoustic instrument controller. I’m curious how it is that musicians can have a distinctive sound that we recognize in an instant. This sound, this voice, includes note choices, timbres, rhythms, and so on. But it’s also a matter of Quality. And how this Quality can be felt through the mediations of electronic gear controlling acoustic instruments is a wonderfully interesting problem indeed. 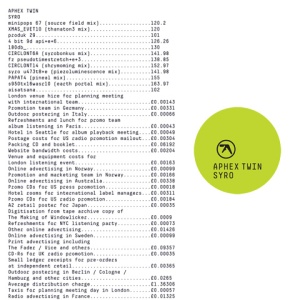 In an interview some years ago, the electronic musician Richard James, aka Aphex Twin, once said that he didn’t care much for the music of Karlheinz Stockhausen. James pointed out two things: Stockhausen’s music had no groove and no basslines. I remembered both the irreverence and pointedness of that comment recently as I have been listening to–and grooving on–James’ recent return to electronic music, Syro.

Syro is a compelling listen for a few reasons. First, each track grooves hard–not in the generic, boom-boom-boom-boom 4/4 way that so much contemporary electronic music does, but in James’ distinctively loose yet hyper tight and syncopated style. Hard to put into words, but the music has its own sound. Second, each track changes constantly by morphing, developing, unraveling, changing direction, and in general, surprising the ear. Third, each track uses a fairly limited soundset of analog-ish electronic timbres. (James even includes a list of all the equipment used to make this record. Whoah.) The limited soundset acts as a constraint–maybe for the composer, and certainly for us listeners. As we listen, we can follow the sounds–including dry kicks and snare drums, squelchy bass tones, slightly out of tune pads, and delay effects–as they enact their constant changes. It’s in this way that James’ music ranks among the most satisfying out there by literally being a process in constant flux. Finally–and this relates to point two above–the arrangements of sounds and the structure of each track are lean, meticulous, and always seem to create a sensation of balance. Everything just seems so, with nothing extra or unnecessary–be it repeats or a melodic theme. Syro is inventive, groovy, well-designed, and efficient music.

What are others saying about Syro? Here’s a sampling of quotes from some reviews.

“Sixty-five minutes of highly melodic, superbly arranged, precisely mixed, texturally varied electronic music that sounds like it could have come from no other artist.”

From The Quietus, here’s Joe Clay:

“…a master of his machines, an accomplished musician and producer showing off his vast skills.”

From The Guardian, here’s Tim Jonze:

“…every time he playfully mangles a rhythm or throws in a disorientating series of bleeps or robot gargles just to keep you on your toes.”

Another from The Guardian, here’s Piers Martin :

“Everything he creates has a beautiful cohesion to it: whether it’s serene ambient electronica, laser-guided acid, or disconcerting, dystopian glitch, the work clearly comes from a singular mind but one that is not affected by outside trends.”

“This is a largely instrumental album that creates, obeys and breaks its own rules, seemingly at random. Rhythms establish themselves through familiar configurations and recognizable timbres, then erode and regroup in new patterns. Synthesized sounds are used to signal melody, or texture, or both, or sometimes neither. Everything is tethered to a grid, but nothing feels fixed.”

“As if by stubbornly refusing to acknowledge many aural signifiers and non-Aphex EDM evolutions of the last decade, the artist has presented an utterly human, mostly nonverbal defense of his aesthetic: atmospheric, occasionally funky and meandering instrumental electronic tones, lovingly crafted, with imaginative internal logics.”

“Where some producers set up a foundational beat and then let it repeat endlessly, Aphex Twin drops in slight changes from one measure to the next.”

And finally, here is James himself talking about musical technologies in a recent interview in Rolling Stone:

“It’s taken people a long time to work these new tools out, and now it’s just now kind of like an acoustic guitar. We’re half-cyborg already, whether we like it or not. Everything is based on computers – our whole economy, and most of our creative pursuits, as well. We’re not physically connected to them, but that doesn’t mean they’re not part of our brains.”