I’ve been reading more Lawrence Weschler lately, this time his engaging study of the painter David Hockney, True to Life: Twenty-Five Years of Conversations with David Hockney (University of California Press, 2009). I first encountered Hockney’s work in the mid-1990s at the Boston Museum of Fine Arts. The exhibit was a show of Hockney’s English countryside landscapes. They seemed simple on their surface, but there was something going on in them with regards to perspective: the works seemed to capture multiple viewpoints at once, drawing you in. To make a musical analogy, they were visually polyphonic. I bought a poster and had it framed.

Anyway, what makes Weschler’s book engaging is its story of Hockney’s seemingly boundless obsession with perspective in visual art. One fulcrum for this obsession is his interest in how and why European art underwent a profound shift in perspective, precision, and realism around the 1420s. Hockney thinks the reason is due to the use of optical projection devices. Hockney, who even wrote a book about his (controversial) theory, Secret Knowledge (2001), expresses his curiosity about the matter in the form of a question: “How come awkwardness seems to disappear completely from Western European art for three hundred years and then just as quickly reappear? It all just happens by itself? That would be the loopy theory” (133).

Weschler traces how Hockney arrived at his interest and along this journey are several series of works that I found interesting. One early series consisted of photo collages built out of dozens of Polaroids. Hockney took photos of his subject matter–his living room, a swimming pool, a California highway, the Grand Canyon–from a multitude of viewpoints. Then he organized the photos in a way that requires the viewer to slow down and move through the pictorial space, one segment after another–back and forth, up and down–always scanning over time. Here are two: 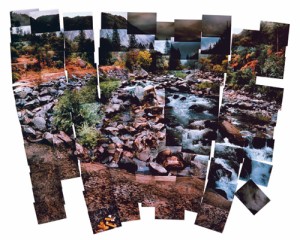 One interesting thing about these collages: each photo is a self-contained viewpoint. Another thing: the effect is at once unrealistic in that you notice the artifice of Hockney’s technique and also hyper realistic in that you find yourself noticing that this is actually how we see the world: in and as a series of glances, instants, and angles that enter our field of perception for a flash before we turn our attention elsewhere. The effect is pure art: simple, yet it gets you thinking.

As I read and looked at the pictures I thought about how all this might pertain to musical practice. (I also wrote about perspective in music here.). Music, of course, is different from visual art in that it requires time to unfold. You can’t listen to a symphony in a second–you have to wait it out and keep paying attention, moment by moment. But the fact that some musics–intensely polyrhythmic musics or polyphonic musics, for instance–make deep perceptual demands on us insofar as they pack a lot of information into each moment reminded me of how Hockney’s works seem to chase after ways to model themselves on how we apply our senses over time.

Incidentally, when Hockney spoke of the “awkwardness” in art reappearing after three hundred years, he was referring to Cubism. Picasso, Hockney told Weschler, wasn’t trying to “deconstruct” his subject matter. Rather, he was trying to faithfully convey a sense of how we behold the world around us. “The monocular claim to univalent objective reality is falling away once and for all,” he says, “and we are being thrust back on ourselves, forced to take responsibility for the way we make and shape our realities, with eye and hand and heart” (143).