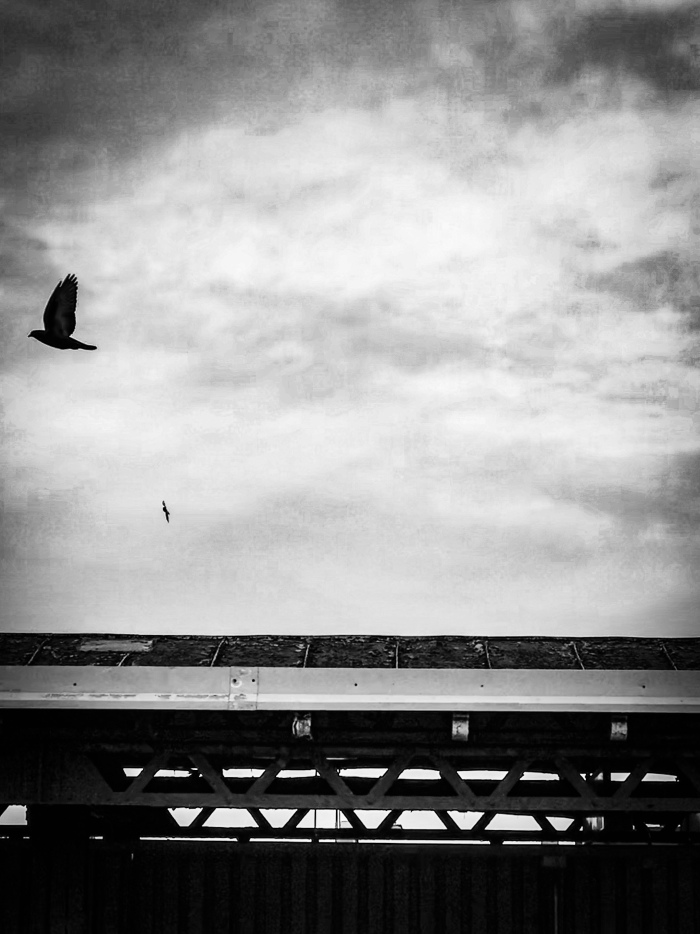 “Weezer isn’t stuck in roles, so we just do what we want to do, what makes us excited.”
-Rivers Cuomo, Weezer

I’m listening to Weezer’s cover of “Take On Me”, a synthpop hit from 1984 by the Norwegian band A-Ha. I like both versions of the song: the original was exceptional—a song almost sublime in its MIDI-sequenced tightness, arranged just so, here for a pristine three and a half melancholy minutes then gone—and Weezer’s cover is a surprisingly moving tribute. Even though A-Ha was a trio powered by drum machines and sequenced keyboards, their song remains intact 35 years later with almost a billion views on YouTube and now, through Weezer’s rendering of it in rock form. The story of how Weezer came to cover “Take On Me” and other 80s gems is this: in 2018 a young fan reached out to the band on Twitter and suggested that they do a version of Toto’s “Africa.” Surprisingly, the band obliged and their Toto cover became their first hit in a decade. Maybe the success of that song got the band thinking about covering other songs? In any case, cover songs they did, and as a side note: when someone covers TLC’s “No Scrubs” and doesn’t change the lyrics to fit a male singer (TLC were an all-female 90s R&B group) it’s always worth a listen.

As I listened and re-listened to “Take On Me” I thought about what kinds of things the song was telegraphing to those of us around for the original. To start, the Weezer cover traffics in nostalgia for our always receding musical past, and maybe it exemplifies what Simon Reynolds has called retromania. Cover songs trigger our minds in certain ways: when you listen to a cover of a song whose original version you know well, you jump into a super-fast comparative mode, trying to figure out what is the same and what is different between the two versions. And when that original is powerful, something else happens as well: your comparative mind shuts down a bit and you lose yourself in the music, not quite sure whether you’re hearing the new through the prism of the old or the old through the new. Or some combination of both of these ways of listening.

What made the original “Take On Me” sort of exceptional was that it perfectly encapsulates what pop should do, which is unfold itself through brief verses whose sole purpose is to lead you to catchy and repeated choruses as efficiently as possible. But more than this, “Take On Me” is an example of musical form and musical sound perfectly melded. Returning to the song now, it sounds as if it was expressly designed for the synthesizers and drum machines used to make it. English Producer Neill King, who was brought in midway through A-Ha’s initial recording sessions to bring zing to the productions, explains in a Sound On Sound article some of the electronics he used to achieve a sound:

“There was the Synclavier from which everything was sequenced. This was used as the drum machine; a mixture of synthesized and live samples courtesy of Tony Mansfield. The Synclavier was the first synth that grooved a little more following the first generation of drum machines. In terms of effects, there was a lot of reverb going around and we slammed the hell out of a Lexicon 224X and AMS RMX16. There was also an RMX15 for stereo delay. Classic ’80s stuff.”

The version of the song recorded with Neill King was a moderate hit, yet the band’s record company, Warner Brothers, was convinced they could make an even more compelling version, so they brought in producer Alan Tarney to re-build the music. Tarney’s go-to studio equipment included a Roland Juno 60, a (by then slightly dated) LinnDrum drum machine, and a UMI MIDI sequencing computer which were all used on the song. As Tarney recalls in the same Sound On Sound article,

“’Take On Me’ had a fairly standard Linn snare sound and I just remember compressing it quite heavily to get a very slappy feel. At the same time, while the quality of the Linn’s snare, toms and kick drum was quite good, its cymbal sounds were a bit crappy—no high end. So [A-Ha guitarist Pål Waaktaar] overdubbed real cymbals and possibly some hi‑hat in the studio, to add some clarity and get more of a live feel.”

Out of this layered production process “Take On Me” emerged and became a chart-toping hit, in part thanks to an expensive and innovative video whose hand-drawn comic book graphics kept the song in heavy rotation on MTV.

If you toggle back and forth between A-Ha’s and Weezer’s versions of “Take On Me” a few differences become apparent. First, the original is in A major, while Weezer’s cover is transposed down a step, presumably to better suit vocalist Rivers Cuomo’s vocal range. Production-wise, the original has a crisper, livelier sound than Weezer’s, while Weezer’s has a darker, almost dull sound (the drums especially), albeit with more weight. This is strange insofar as the original was recorded onto a warmer-sounding analog tape-based system and not into a computer-based DAW as today’s recordings usually are. Also, the original recording of “Take On Me” has more layers of textural nuance than Weezer’s version. Little programming details—like the high register bumble bee-like keyboard line that flies around the stereo field and off into its own reverb (from 2:02-2:08), or the drum machine fills that sounds uncannily like what a real drummer would play—still sound amazing to me. Weezer partly makes up for that lack of nuance with some lovely filigree electric guitar arpeggios added to the chorus, but on the whole, the song’s original version remains a testament to careful musical construction. Let’s take this moment to remember a truth about music production: it’s not about whether the instruments used are electronic or not. What matters is how the music is put together.

The second thing you notice is that Weezer’s Cuomo seems a stronger singer than A-Ha’s Morten Harket. Harket has a sweet choir boy voice, but I only recently noticed how his word enunciation wasn’t always clear and when he hit sustained falsetto notes his energy and pitch could flag a wee bit. (I guess those 1980s Lexicon 224 reverbs could only do so much.) To me, Cuomo’s voice sounds more present and careful in its phrasing and use of micro, almost Michael Jackson-esque breathy/rhythmic glottal stuttering sounds around the words. His voice is a subtle instrument. A third noticed thing is what we might call the transferability of great songs. In Weezer’s version of “Take On Me” there’s two new sections: a half-time bridge where the band breaks out the distorted electric rock guitars and sloshy cymbals and a brief break before the final chorus where the song reduces to just an unplugged acoustic guitar and intimate vocal. In the half-time section we hear the suppleness of A-Ha’s harmonic progressions, and in the acoustic break how Harket’s melody still holds up with even the sparest of accompaniment. A strong song maintains itself through all kinds of versioning by transferring its energies from one artist to another over time.

A fourth noticed difference between the two versions of “Take On Me” is the degree to which electronic pop can be “rockified”, which in turn raises the question of what happens when rock music gets a synth pop (or say, electro R&B) treatment, which in turn might push us to consider the general porousness of various pop musical styles. Weezer keeps the chord progressions and melody and basic keyboard parts from A-Ha’s original, but adds crunchy distorted electric guitars, bass, and drum set to the mix. I’ve written on this blog before about the “trickle-down” influence of EDM aesthetics on rock and pop. Weezer’s covers of 1980s songs now have me thinking about the hegemonic power of rock style to shape how we hear and imagine every other kind of music.

The impact of Weezer’s cover of “Take On Me” is heightened by the band’s video for the song, which is delightful and frames a simple story within a story. The simple story’s protagonist is a teenage Cuomo and his band. When mom leaves the house he grabs a slice of pizza and mobilizes his bandmates to rip through Weezer’s version of the song. The viewer sees Cuomo and his mates growing up in the 80s to the sounds of synth pop and rock: there’s Cuomo in his bedroom doodling a giant “W” (for Weezer) in a notebook and imagining make one day making it big. This simple story is simultaneously set inside A-Ha’s original video for their song with its hand-drawn graphics. Weezer quotes this video by having it temporarily turn teenage Cuomo and Co. into a comic strip—as if the comic is a visual representation of Weezer’s cover version interpenetrating with A-Ha’s original recording. The cumulative effect feels like layering nostalgia, and so for some viewers, these two versions of one song might bring back vague memories now blended into a single sensation. In music, the past lives in the present and the present uncovers the past. When conditions are right, some songs find unexpected ways to get us feeling again.