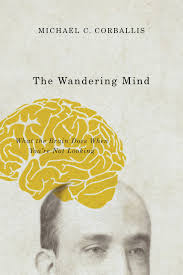 In a chapter on the sources of creativity in his book The Wandering Mind (2015), Michael C. Corballis draws on a 1960 article by D.T. Campbell (“Blind variation and selective retention in creative thought as in other knowledge processes.” Psychological Review 67, 380-400) about the constitutive elements of creative thought. Campbell distills the process into two concepts: “blind variation” or wandering which is subject to chance discoveries, and “selective retention” or recognition of these discoveries. Using the metaphors of paths and sparks, Corballis elaborates:

“Blind variation is captured in the very notion of wandering, whether ambulatory or mental–straying from a set path into unknown territory. What we find there depends on chance. It is the randomness of our wanderings, then, that supplies the spark of creativity, although when we do stumble across something new and important we need to recognise it as such–what Campbell called ‘selective retention'” (154).

This notion of blind variation/wandering subject to chance discoveries resonates with Nicholas Nassim Taleb’s notion of creative tinkering described in his essential book Antifragile (which I wrote about here). And the selective retention/recognition part reminds me of Gerd Gigerenzer’s work on gut feelings, which are intuitive judgments derived from paying attention to cues in one’s immediate environment while ignoring unnecessary information. To sum up, what’s powerful about Campbell’s blind variation + chance + recognition model of creativity is how it posits the process of ideational/artistic craftsmanship as not inventing per se, but rather setting ourselves on paths where we might notice sparks flying around.