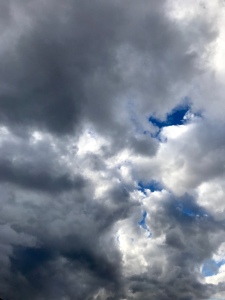 Beginning a new piece of music is the most exciting moment, as long you don’t get ahead of yourself, get bogged down in as yet unnecessary details, and instead stay focused on the task at hand. But what is this task, exactly? For me, it’s being on the lookout for something enchanting. The other day I was beginning a new project (coming to a theater near you—in about two years). I loaded up an audio file from one of my earlier recordings into my sampler. The piece was instantly sliced into fragments of itself, each fragment assigned to a pad on my MIDI controller. The pads lit up a greenish-blue, as if they were suddenly alive and radiating excitement, which in turn made me excited. I paused for a moment to consider the workflow so far. A few decades ago this kind of sample-mapping would have been truly laborious. Today it took me ten seconds.

With no idea of what it might sound like, I randomly tap a pad in the middle of the grid matrix. The pad sounds a shard of a chord in which I can hear piano, finger cymbal, and reverb resonance. I touch it again. There’s a ton of information to process when you listen to even a one second sample, and so repetition becomes a way to refresh your memory of its details. I then move to other pads, one at a time. I turn on the “Poly” mode so I can play two pads at a time (mono feels limiting). What am I listening for? It’s too early to know. I move all over the grid, hitting pads in the middle and in the corners, up high and down low, trying to remember what sounds where. (The sampler has re-shuffled the samples from my original source into an unfamiliar deck.) I remember those 1980s video games like Merlin, Simon, and Fabulous Freddy that combined tones and colored lights to test your memory for spatial patterns. This is like that, except the end goal is to find something that could be a new musical beginning. I keep tapping, gravitating to a few samples, but not committing to anything.

While the number of pads on the grid controller is fixed, its configuration is open. I adjust the “Sensitivity” knob, moving from the default 100 percent downwards to 87, then 84, then 50. Each downward turn makes the sample slices longer and re-scrambles their arrangement across the grid. I find that if a slice is too long, you hear too much of the original music and that’s just not interesting. (Just like Puff Daddy sampling an entire Police song wasn’t interesting.) I don’t want to hear the original piece; I want to hear some aspect of it that I never noticed before. I turn the sensitivity back up to the ninety-percent range and keep tapping. For all the meticulous documentation on how to use the controller, its manufacturer doesn’t offer guidance on the musician’s key responsibility, which is figuring a way to make something that sounds enchanting. Even at this early stage of production, it could take me five minutes or five weeks to wrangle the sampler’s parameters so that I hear something appealing. It’s possible too that nothing will work. But I’ve decided that something will work and that I’ll know it when I hear it, so I keep tapping. The minutes tick by: tap, no that doesn’t sound good, tap, no that doesn’t sound good. I keep going, trying to imagine how each sample could be part of something as yet conceived. I wonder if I’m listening as holistically as one should when auditioning samples? Part of the fun here is the uncertainty of the process, coupled with pondering whether and how the sounds could work in a new context. Tap, tap. The more I tap the more I forget that my original plan was to discover something enchanting. It doesn’t matter now, whatever…

And just when it feels as if nothing matters, I hear something. It’s a pad in the upper left-hand corner. How had I missed it? It was right there the whole time. It’s a chord I can’t identify—with a short attack but a beautiful long decay too. (There’s no clicking artifact, the sound of a sound being cut off—I don’t want to have to start editing this early in the game.) And a second pad nearby goes with it. There’s a tonal relationship there, enough that I can alternate between the two of them. Game on! I tap faster now, searching the rest of the grid for a third sound—something neutral, something with which I can alternate those two sounds in the upper left-hand corner. I find a shorter percussive sound on the lower right. It was there the whole time too, but maybe it needed the other sounds to help it be noticed? I can do some kind of low-medium-high pattern with these sounds, a pattern that repeats and leaves space. Space, I’ve discovered, is way underrated in music. The more space I leave, the more options I have down the line. (In music as in life.) This moment was worth the tedium that led up to it and now I quickly work out a few patterns.

What’s interesting about auditioning sounds is the rhythm of the production process, which began the moment I loaded up the samples. The intensity of the process was dialed up as those three audio bits suggested themselves as a potent combination, shifting my attention to focus on just them. Now they’re singing individually, even though there’s no piece yet. But I can take comfort in my feeling that the samples contain faint traces of some yet-to-be music. Maybe a whole something could be built upon them and the next steps will be to start thinking about how to do that.

3 thoughts on “Music Production Mindsets: Building Upon The Faintest Traces”